Trying to figure out if a febrile patient showing up to the ED is having a bacterial infection is a conundrum. The main concern is bacteremia, since it confers higher mortality depending on the type of bacteremia a patient has. Inflammatory markers such as CRP and the neutrophil-to-lymphocyte ratio are relatively useful surrogates that may help upfront while blood cultures cook in the lab (and they can take anywhere from 24-48hrs before you get any useful info). Ideally, if one is dealing with a viral infection it would be helpful to know to avoid unnecessary antibiotic therapy. Enter the (semi) procalcitonin aka PCT.

Its use in differentiating bacterial from viral infections has gained some popularity following some data on its utility to de-escalate antibiotics in respiratory infections (see here). To cut to the chase, those who have a respiratory infection but have bacteria as the etiology will have higher PCT, with the levels rising within 3 to 6hrs, mimicking the host inflammatory response (1). In a sense, the higher the PCT levels the more severe and widespread the infection is, as it can be seen in this table (2; note to convert to ng/mL, multiply the value by 10):

In other words, levels <0.5ng/mL means infection is highly unlikely and looking at the suggested algorithm within the above paper (and here 3) you can see it is used as a cut-off to start antibiotics 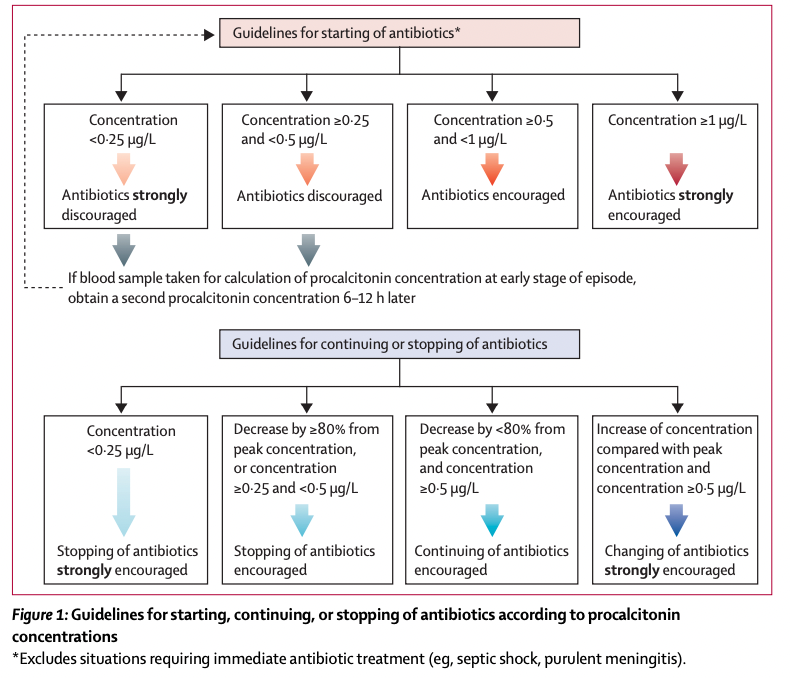 There is some data to suggest that it can be useful in febrile patients with undifferentiated sepsis to predict whether or not they will have bacteremia, which may allow us to, if not de-escalate antibiotics, at least rule out bacterial infections as the etiology of a fever. Low numbers do not rule out localized infection but higher number suggest the presence of systemic infection.  While it sounds promising, the data here suffers from a few issues:

The first point where PCT measurements may be helpful would be the ED and there is some data to suggest its utility. In a cohort of 295 patients (4), a procalcitonin of 0.1 ng/mL was found in more patients with true bacteremia (75%) when compared to patients with contaminants (28.7%). Using a cut-off of 0.1475 ng/mL, the AUC-ROC yielded a sensitivity of 75%, specificity of 78.9%, and PPV and NPV of 16.9% and 98.2%, respectively.  A retrospective study of 295 patients who presented to the ER found that, while PCT levels were correlated with blood culture positivity, it did not correlate with SIRS criteria, suggesting it may have some utility in differentiating other causes of SIRS from bacteremia (5):

An ED study of over 3300 blood samples found similar results as prior studies (7): 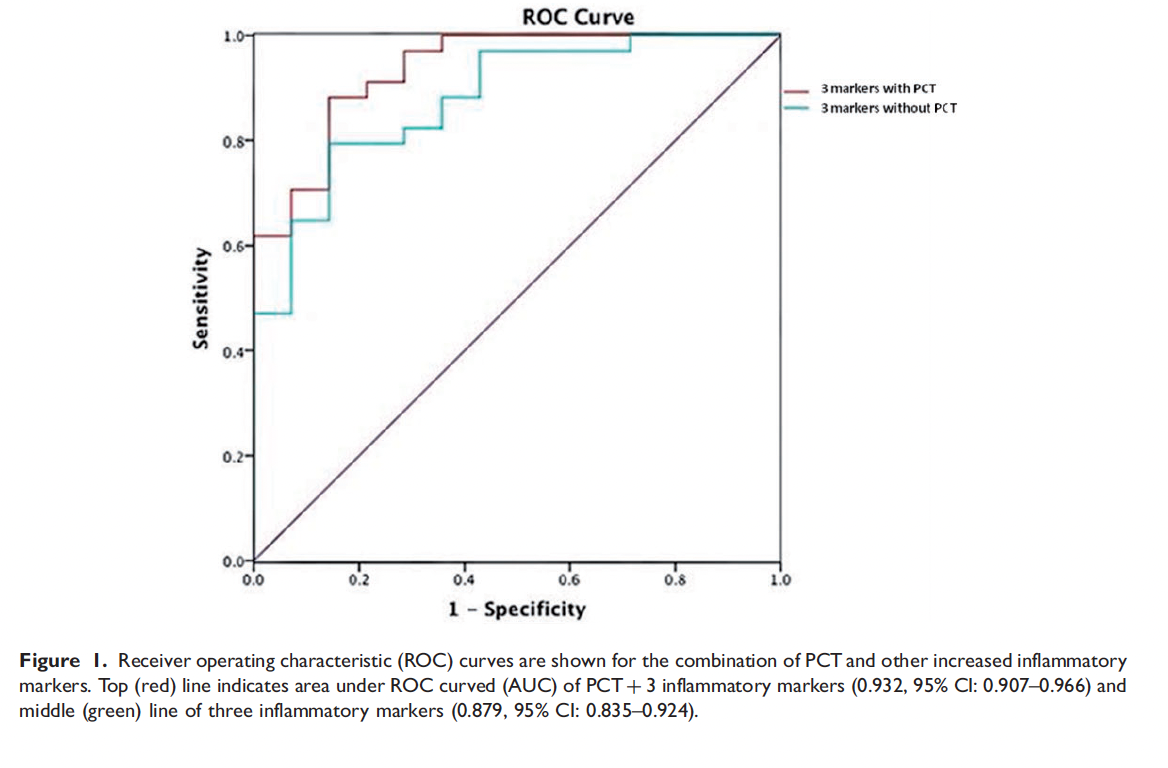 What about the inpatient setting? A retrospective study of 628 inpatients with bacteremia compared CRP, WBC, and procalcitonin on admission (7). Of these, 162 had positive blood cultures, with 57 having coagulase-negative staphylococcus (CoNS). While there was a correlation with higher procalcitonin levels and positive blood culture results, the PPV was significantly lower than the NPV. Notably, a cut-off value of 0.5 ng/mL yielded a NPV of 93%, assuming a prevalence of roughly 20% for bacteremia:

When compared to WBC, CRP, and neutrophil-lymphocyte ratio, procalcitonin had a better performance:

PCT had a higher utility in CoNS to differentiate between contamination and true bacteremia, but again it was not quite perfect in its performance:

In another of 165 febrile patients with suspected community acquired infection, patients with bacteremia had higher levels of inflammatory markers, including PCT (8):

The sensitivity/specificity was calculated for different cutoffs, with the best one being 0.4ng/mL:

When looking at AUR-ROC for CRP and ESR when compared to PCT, the latter performed better than the previous 2:

A similar study of 156 patients admitted to an anesthesia ICU found that while procalcitonin was higher in the bacteremic group than in the non-bacteremic group (11.9 ng/dL or 0.119 ng/mL vs 5.9 ng/dL or 0.059 ng/mL), the difference was not statistically significant (p =0.168). Using a cut-off of 0.093ng/mL, this yielded a sensitivity/specificity of 35% and 83%, respectively. Moreover, the difference in PCT levels was also not statistically different between gram-negative or gram positive bacteremia (p = 0.145). There was a difference in PCT levels in SIRS (0.9 ng/dL), sepsis (4.2), and severe sepsis/septic shock (14.2), however this did not help predict bacteremia. Indeed, in this cohort the NPV was not incredibly helpful:

So there is a correlation, but the different cut-offs make it a bit difficult to use it as an adequate rule out test. In a cohort of over 1000 patients, procalcitonin levels were used to predict results for a SeptiFast multi-pathogen PCR test from blood (i.e. similar to a respiratory viral panel, 10). Here, the test seemed to perform better but specifically to predict the SeptiFast PCR rather than a true blood culture:

Using a cut-off of 0.37ng/mL, the sensitivity of PCT to predict blood culture results was  87%. In a cohort of over 300 patients with at least one positive blood cultures, those with a PCT level >0.5ng/mL were more likely to have leukocytosis, tachypnea, requirement for vasopressor support, and more likely to be admitted to the ICU when compared to those who had a PCT level <0.5ng/mL (11). Moreover, in this cohort 59% of those with 2 sets of positive blood cultures had low PCT compared to 62% with high PCT levels (p = 0.634). Indeed, there was no statistical difference in PCT levels based on organism isolated, suggesting at least in this cohort the NPV was not good enough as a rule-out test:

One retrospective study of 507 of bacteremia found that bacteremia due to E. coli tended to have the highest procalcitonin level, significantly higher than Staph aureus, but lower than CoNS (though still above the usual threshold, 12):

So Is it Useful?

Maybe? Given we have no clear cut-off, the only utility would be in a completely undetectable procalcitonin level, though some labs may not report a value under 0.5ng/mL. Indeed, the above studies may not have much in the way of external validity as they used values significantly lower than the manufacturer cut-off. Even using a cut-off of 0.5ng/mL may not yield the greatest performance. A meta-analysis of 58 studies with over 16,000 patients found that at a threshold of 0.5ng/mL, the overall sensitivity and specificity was 76 and 69%, respectively (13):

Notably, the test had higher sensitivity in ICU patients while its use in those with immunosuppression had the lowest sensitivity. Further, the NPV was highest in the ICU population as well:

Another meta-analysis of 17 studies and 2008 patients focused on the ED population (14). Here, the pooled sensitivity/specificity using studies with a 0.5 ng/mL threshold was 76% and 70%, respectively, though the performance of the test varied widely depending on the population: