By apena17 in AIDS, CNS Infection, Cryptococcus, Meningitis on November 13, 2022
No comments

During residency, I had the opportunity to do a global health elective where I spent a month in Lima, Peru rotating through Cayetano. I spent the majority of the time in the Tropical Medicine ward, where tuberculosis was everywhere. One of the more vivid memories was a patient with AIDS and cryptococcal meningitis. The residents performed a lumbar puncture on the patient, and measured the opening pressure which was a fairly impressive 60cm H2O. The LP kit manometer was not enough to measure the opening pressure, meaning we had to hook up an additional catheter to continue measuring and draining CSF fluid. The more impressive thing was, this wasn’t the patient’s first LP. Indeed, the CSF pressure is an important prognostic marker in cryptococcal meningitis, with guidelines recommending frequent drainage of CSF if the opening pressure is significantly elevated.

There is some data to suggest that the opening pressure is correlated with fungal load.  A secondary evaluation of a randomized trial found that AIDS patients with higher CSF cryptococcal titers tend to have higher CSF pressure (1):

Notably, 12-month mortality was higher in those with baseline opening pressure >350mm H2O, though the rates of relapse or mycological response were not different:

This was also seen in a randomized trial of amphotericin + flucytosine or placebo, where 13 of 14 patients who died and had initial opening pressures measured had a median OP of 280 mmH2O (2). A retrospective cohort of 302 patients with cryptococcosis found that baseline CSF opening pressure >250mm H2O was associated with higher 90-day mortality (3):

A randomized trial evaluating amphotericin B with or without flucytosine for induction of cryptococcal meningitis in HIV patients found that in 14 of the patients that died, 13 had ICP greater than 25cm of H2O (11). A review of 118 patients with cryptococcal meningitis found that patients who died had little or no therapy (under 4 weeks), more likely to have an India ink prep, higher opening pressures, lower CSF glucose levels, and lower CSF leukocyte counts (4):

A small retrospective study found that in a cohort of 21 patients, 14 had deviations from IDSA guidelines with 7 developing neurological abnormalities. Notably, the most common abnormality was lack of CSF opening pressure management (5). So it would stand to reason that higher inflammation leads to higher CSF pressure and higher morbidity and mortality, however one analysis did not find this to be the case, despite there being a trend. This analysis of 2 prospective observational studies (6), one of which took place prior to ART being available, found that initial opening pressure was not associated with increased mortality, despite the fact that those patients who met IDSA criteria for therapeutic drainage trended towards higher 14-day mortality than those with lower CSF pressures (OR 2.1, 95% CI 0.9-5.2). Interestingly, lack of CSF inflammation, marked by initial CSF WBC count <5, was associated with poor outcomes (high rate of positive culture result, OR 17.3, 95% CI 3.1-94.3). Other factors associated with higher mortality included higher colony counts and worsened mental status at baseline.

Given this, the guidelines that were authored by my former chief of ID state the following (7):

Of course, we will never get a randomized trial on this topic, but the vast majority of the literature suggests there is a benefit of repeated CSF drainage. A cohort of 248 patients with cryptococcal meningitis found that patients who died tended to have lower weight, lower GCS at baseline, greater HR and faster RR, and higher CSF fungal burden (8). CSF opening pressures were equal in those who survived and those who didn’t. Despite this, multivariate analysis found that therapeutic LPs reduced mortality by up to 69% after adjusting for HR, CSF fungal burden, and GSC:

In a small study of 35 patients with cryptococcal meningitis, 9 were found to have a CSF ICP of >35cm H2O (10). The author’s protocol was to perform daily LPs on those with high ICP until the pressure was <35cm H2O, thereafter performing an LP every 2 to 3 days until the pressure was less than 20cm and then weekly until discharge. Of the 9 patients with high ICP, 7 managed to survive hospitalization. A few case studies have evaluated the use of more prolonged methods of CSF drainage such as VP shunts. For instance, a cohort of 15 patients with cryptococcal meningitis evaluated the utility of implantation of a VP shunt (12). The median opening pressure in this cohort was 420mm H2O. In one year, 12 patients remained alive and remained cleared from cryptococcus. In a similar cohort, a treatment protocol was applied to a group of 10 patients that had an opening pressure >20cm H2O (13). Those who remained symptomatic after 12-72hrs after the initial LP had a EDM lumbar drainage placed. 8 patients had improvement in their mental status 24hrs after placement of drain.  One interesting study evaluated triple-therapy with amphotericin-B, 5-flucytosine, and a VP shunt in non-HIV infected CM patients with elevated ICP (14). Those who got triple therapy had higher burdens of cryptococcal disease (9533 vs 1398 counts/mL). Notably, at 10 weeks, those in the VP shunt group tended to clear their CSF more often than in the standard of care group:

Moreover, failure rates were less in the VP shunt group at the end of 10 weeks despite having a numerically higher rate of death:

While not the same population, it stresses the importance of controlling intracranial pressure in these cases to reduce morbidity and mortality.

If you recall, tuberculous meningitis is also managed with steroids to reduce inflammation and subsequently lower intracranial pressure (15). There is, however, little data on steroids in cryptococcal meningitis and the one study on the topic did not reach an optimistic conclusion.In this double-blind trial, the use of adjunctive dexamethasone in a 6-week taper dose for cryptococcal meningitis was evaluated with the primary outcome being survival until 10 weeks (16). Notably, one of the secondary outcomes was the change in opening pressure within 2 weeks of therapy. 451 patients were enrolled, and there was no difference in the primary outcome (HR 1.11, 95% CI 0.84 to 1.47). Notably, however, there was a benefit to dexamethasone at days 23 through 43 (HR 2.50, 95% CI 1.23 to 5.05). Further, dexamethasone was associated with a higher risk of death or disability than was placebo at both 10 weeks and 6 months (OR 0.25, 95% CI 0.25 to 0.69, and OR 0.49, 95% CI 0.31 to 0.77, respectively). Despite this, there was a significantly higher change in opening pressure in the steroid group when compared to the placebo group (change -9.2cm, 95% CI -11.9 to -6.5cm).

Acetazolamide was also evaluated in a small, randomized, double-blind trial (17). 24 patients were evaluated, with no difference in the opening pressure or Karnofsky score at day 14: 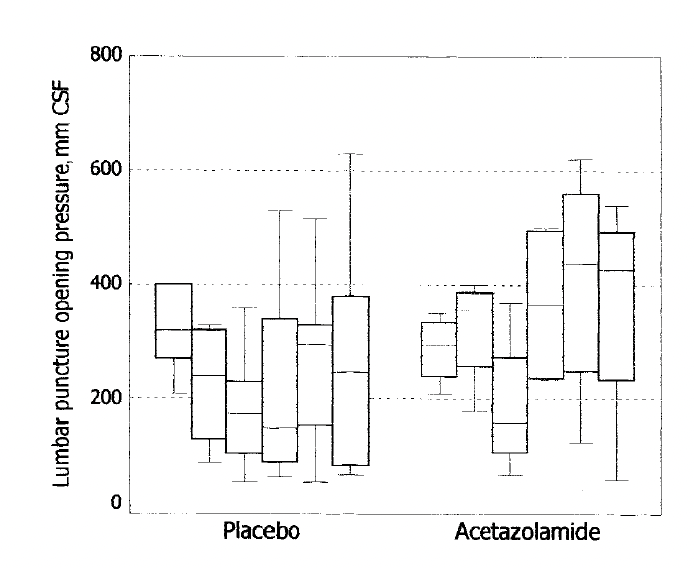 As unfortunate as it may seem, it appears our only choices here are repeated LPs or external drains. Get that opening pressure down!