The Trojan Horse of Antibiotics

I reckon it’s time to write about new antibiotics. I do not like beta-lactamases. Mostly due to their ability to confuse clinicians, however also because it makes it difficult to pick an antibiotic for certain infections. I have written extensively about these, so look at this post. In general, carabepenemases and cephalosporinases within class A (KPC) and class B (metallo-beta-lactamses, which include NDM) tend to cause issues to the newer beta-lactam/beta-lactamase combination such as ceftazadime-avibactam. Add to this other resistance mechanisms, such as the overproduction of efflux pumps, and you can see how difficult it can be to treat such organsms (1).

During infection, iron is not as freely available so that bacteria cannot get to it (simple explanation, I know). Due to this, bacteria produce and secrete siderophores, which bind free iron and re-enter via a siderophore-iron complex iron channel. Cefiderocol, a combination of a catechol-type siderophore (which are produced by bacteria) and a cephalosporin antibiotic, which resembles ceftazidime/cefepime with a new side-chain moiety (1-3). The siderophore allows it to enter bacterial cells under the guise of iron, while the antibiotic itself has higher affinity to penicillin binding proteins, particularly PBP3 (2). Moreover, the combination of cephalosporin and the catechol structure confers enhanced stability against many beta-lactamses, including ESBLs like CTX-M and carbapenamases (KPC, NDM, VIM, OXA-23, OXA-51, etc). Indeed, a study comparing the catalytic activities of beta-lactamases against certain antibiotics found that the efficacy for several beta-lactamases was significantly lower for cefiderocol (2):

The pharmacokinetics of cefiderocol are quite straightforward; like all beta-lactams, it exerts a time-dependent bactericidal activity i.e. time above MIC (3). More specifically, the fraction of free drugs above the MIC. Using this, in a healthy volunteer, either using multiple doses or a single-dose achieves similar AUC, but a single high dose allows you to get a higher concentration (3):

An interesting study evaluated cefiderocol in two culture mediums; one was the cation-adjusted Muller-Hinton broth, while the other one was iron-depleted CAMHB (4). Here, the MIC was significantly lower in the iron-depleted broth, suggesting the iron is a critical factor for determining bactericidal activity. This is important because you would need to ask for a special culture broth if you want to run susceptibility for cefiderocol:

Moreover, in a strain of pseudomonas the rate of iron uptake into bacteria was significantly higher in iron-deleted broths:

As with other cephalosporins that are above the third generation, they do not cover anaerobes or gram positives well, so take that into consideration when using this antibiotic.

Early in vitro data suggested cefiderocol may have a niche role in MDR-gram negatives as well as nosocomial organisms. The SIDERO-WT evaluated the in vitro activity of cefiderocol with 6 comparators and found that it was able to inhibit 99.9% of enterobacteriaceae it was tested on (5). For meropenem-non-susceptible strains, the MIC values were between 2 to 4 mg/dL (99.6%). This is in comparison against ceftaz-avi, which only had 78% susceptibility across all enterobacteriaceae:

Further, it also seems to have lower MICs to those organisms that are non-susceptible to ceftaz-avibactami or ceftolozane-tazobactam:

When looking at pseudomonas, the MIC90 was 0.5mg/L for all isolates when tested against cefiderocol. 99.7% of isolates of pseudomonas that were meropenem non-susceptible also had an MIC <4 mg/dL, suggesting its use in these types of organisms. A panel of 305 isolates of Enterobacteriaceae, 111 of pseudomonas, and 99 of acinetobacter with resistance to carbapenem and other drugs found that its susceptibility was comparable to colistin (6):

As a proof of concept, cefiderocol was combined with other beta-lactamase agents to see if any would inhibit NDMs. Using cefiderocol with dipicolinic acid yielded a 4- to 32-fold reduction in MIC for NDM positive isolates:

Data from 1873 worldwide gram-negative isolates found that at a concentration of 4 ug/mL, cefiderocol inhibited 96.2% of isolates tested (7). In looking at the MIC percentage of other comparators including meropenem, cefepime, ceftaz/avi, and colistin, the MIC90 for cefiderocol was around 4, compared to the rest (note: cefiderocol is listed as S-659266):

In reviewing carbapenem non-susceptible organism, the MIC range in both categories was significantly smaller than in the other drug-bug combinations:

This pattern also held true for other organisms such as stenotrophomonas, burkholderia, and Acinetobacgter, though it may be the latter has more resistance organisms for cefiderocol 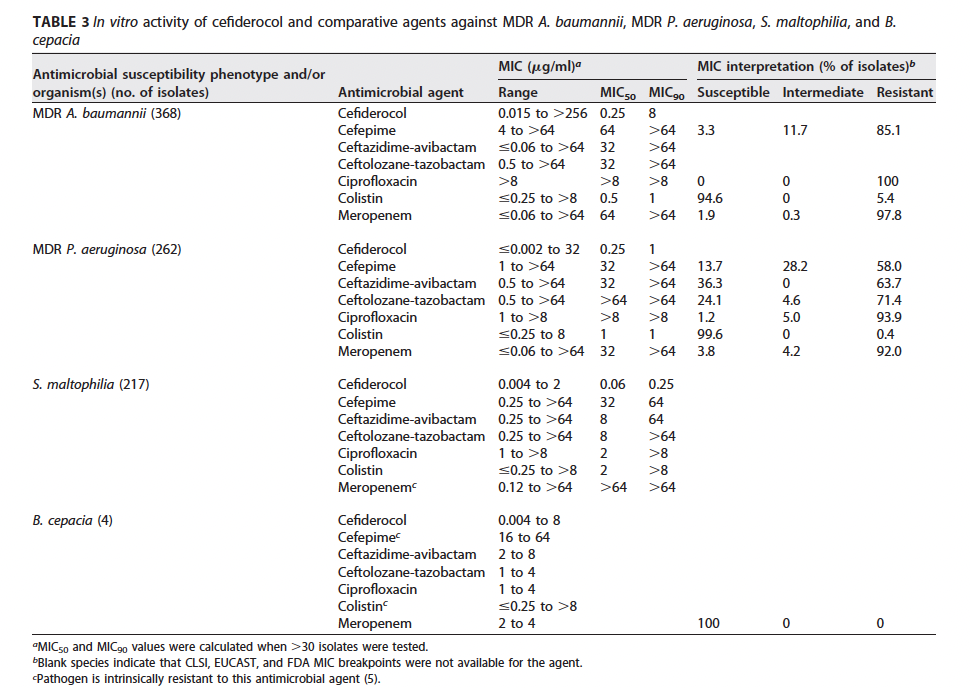 While I anticipate many people looking at this post will be thinking about using it for carbapenem-resistant bacteria, particularly pseudomonas. While it has been used as compassionate therapy for exotic diseases such as infective endocarditis and intra-abdominal infections with MDR Pseudomonas (8,9) most of the data comes from UTI and pneumonia with resistant organisms .

Three major trials have evaluated cefiderocol with carbapenems. The APEKS-NP randomized, double-blind, phase 3 trial evaluated meropenem vs cefiderocol for 7-14 days in patients with nosocomial pneumonia, either VAP, HAP, or HCAP, caused by gram negative bacteria (10). Primary endpoint was all cause mortality at day 14, with 300 patients being randomized in a 1:1 fashion. Notably, more patients in the cefiderocol group had higher severity of disease (49% had severe disease in the cefiderocol group compared to 33% in the meropenem group). All-cause mortality at day 14 in the ITT was similar between both groups, achieving non-inferiority.

A randomized, double-blind trial evaluated cefiderocol with imipenem-cilastatin in a 2:1 fashion for cUTI in a cohort of 452 patients (11). At the test of cure, primary efficacy endpoint, a composite of clinical response and microbiological response, was achieved by 73% of the cefiderocol group and 55% in the imipenem group (adjusted treatment difference 18.58%, 95% CI 8.23-28.92). This pattern held true for subgroup analysis:

The CREDIBLE-CR was a phase-3, multicenter trial that evaluated the utility of cefiderocol with best available therapy for patients with a variety of carbapenem-resistant gram negative infections (12). This open-label trial randomized patients with either bacteremia cUTI, or any pneumonia in a 2:1 fashion to either cefiderocol or best available therapy. 152 patients were evaluated, though more patients in the cefiderocol group were older than 65 years of age, have severe renal impairment, or required ICU at randomization. In the ITT analysis, the rates of clinical cure at the end of therapy was similar in the cefiderocol group with the best-available therapy for nosocomial pneumonia, nearly 50% each, which seem to be the pattern overall for each type of infection:

While I tend to be more concerned about clinical outcomes, it should be noted cefiderocol tended to have higher rates of eradication at the test of cures in the microbiologically evaluable group. One interesting tidbit here was that the rates of mortality at 14-days were higher in the cefiderocol groups for either bacteremias and nosocomial pneumonia, which was not seen in the cUTI group:

This was found to be due to a higher rate of patients in the cefiderocol grup being infected with Acinetobacter spp.

So to recap, this new cephalosporin changes its molecule to make it more resistant to the non-Ambler class B (i.e the carbapenameases of which NDM is the most well known one), allows it to grab a hold of iron to “sneak” into the bacteria, and overcomes resistance for non-beta-lactamase mechanisms. All while providing no gram positive or anaerobic resistance, but allowing you to use it as opposed to colistin. Pretty neat for a trojan horse.