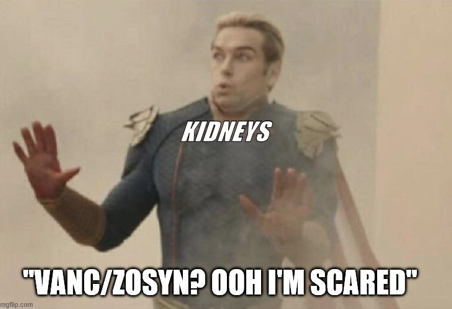 The Nephrotoxicity of Piperacillin-Tazobactam

Depending on where you practice, I think it is safe to assume there is a “nickname” for the combination of vancomycin/piperacillin-tazobactam (VAN/PTZ). “Guerilla-cillin,” “Parkla-mycin” or just “the big guns” this is a very common combination that is thrown up front for sepsis or health-care acquired infections (the debate of whether this is an appropriate approach for these patients is not the topic of this post). Over the years, there has been an interest in the risk of acute kidney injury with this combination. Indeed, vancomycin is a well known nephrotoxin, and I discussed previously why the goal trough of 15-20 actually guarantees you obtain an AUC for vancomycin of 400, rather than allowing you to give it without risk of renal injury. Many papers and several other people smarter than me have discussed this topic at length (see here and here).

There are a few caveats prior to discussing the data. The first is the fact most of this is data comes from cohort studies. I do not think we will ever get a RCT comparing PTZ and either cefepime (FEP) or meropenem (MER). As such, these studies tend to have unmeasured bias though many attempt to correct for these with propensity score matching. The second, and I think more important, deals with the definition of acute kidney injury used in these studies. Whether you fancy the RIFLE criteria (1):

You’ll notice that creatinine is used as a surrogate for renal injury. This is what is measured in these studies, an increase in creatinine. There are several issues with creatinine, which are highlighted in a nice review article (3), however you should note a few:

In other words, an increase in creatinine may not necessarily reflect a drop in renal function. And if you think about it, the concern with renal injury is mortality or need for dialysis, most likely both (for you and the patient). One review on the topic of PTZ nephrotoxicity discusses a proposed mechanism for the rise in creatinine seen with its use (4):

Here, PTZ is able to bind OAT1 and OAT3, anion transporters that mediate creatinine transit. Vancomycin suppresses the expression of these pumps. The net result ends up being less transporters which are then bound by PTZ, leading to a rise in creatinine that is not necessarily reflective of true renal injury but rather decreased excretion of creatinine at the proximal tubule.

There are quite a number of studies on this topic, which makes it quite overwhelming to go over. The biggest study involved a secondary analysis on an RCT which evaluated the role of procalcitonin in dictating antibiotic therapy in an ICU populations (5). Patients were randomized in a 1:1 fashion to therapy with antibiotics according to guidelines (standard exposure), or drug escalation based on PCT levels (high-exposure). Primary endpoint was eGFR <60. The percentage of patients with eGFR <60 was greater in the high-exposure arm (48%) when compared to the standard exposure arm (43%, p-value 0.0001). Most patients in this cohort presented with acute renal injury due to sepsis. Comparing all antibiotics, those treated with pip-tazo had delayed improvement in eGFR when compared to meropenem:

A multiple effects model found that eGFR improved the most when PTZ was stopped, compared to meropenem and cefuroxime, suggesting a possible improvement in renal function following cessation of PTZ:

Another retrospective cohort study (6) used propensity score matching to compare renal failure according to the AKIN criteria in critically ill patients treated with either VAN/PTZ or VAN/FEP. There was no difference in regard to patients developing AKI in the VAN/PTZ group (32.7%) or the VAN/FEP group (28.8%) in raw analysis, nor in the propensity score weighted analysis. A larger, retrospective cohort study of critically ill patients compared the two aforementioned combinations along with vancomycin and meropenem (7). Here, a total of 2492 patients were retrospectively analyzed, with the vast majority being given VAN/FEP. Patients in the VAN/PTZ group were more likely to have acute kidney injury as defined by KDIGO definition at the end of the study period:

And multivariate analysis found that VAN/PTZ, pressor use, high trough concentration, and higher co-morbidity score were associated with higher incidence of renal failure

The duration of dual therapy seems to have an impact on the risk for acute renal injury. Patients who received any combination of vancomycin with either PTZ/FEP/MER for <72hrs did not have a difference in the rate of acute renal injury, despite these being critically ill patients and after controlling for several variables including other nephrotoxic agents (8):

This pattern is also seen in less critically ill patients. For instance, in a retrospective cohort of Veterans with diabetic foot osteomyelitis and treated with either VAN/PTZ or VAN/FEP (9), patients in the VAN/PTZ group were more likely to have had acute renal failure (29.3% vs 13.3%, p-value 0.09), though this did not reach statistical significance. In multivariate regression analysis, PTZ was associated with greater risk of renal injury but did not reach statistical significance which may have been due to the low number of patients in the cefepime group compared to the PTZ group:

Similarly, a larger matched-cohort of patients treated with VAN/FEP or VAN/PTZ found a higher rate of AKI per AKIN criteria in the PTZ group compared to FEP (36.4% vs 10.9%, p-value 0.003), with OR for VAN/PTZ as a risk factor when compared to FEP combination being 5.67 (95% CI 1.66-19.33, 10). Furthermore, a larger retrospective study out of Detroit found that in a multivariate analysis that , VAN/PTZ was independently associated with AKI per the RIFLE criteria (HR 4.3, 95% CI 2.7-6.7, 11). Notably, there was no difference in the rates of AKI in the VAN/PTZ group when stratified by vancomycin troughs, which was different from the VAN/FEP group, where a direct correlation was seen in those with vanc troughs >15 (13% vs 1% p-value 0.003):

Finally, a single-center retrospective study evaluated risk of AKI in patients with VAN/PTZ and VAN/MER (12). There were higher rates of acute renal injury in the pip-tazo group compared to the meropenem group:

And multivariate analysis found that high vanc troughs, and vanc dose >4g along with VAN/PTZ were independent risk factors for acute kidney injury per AKIN criteria:

Implementation of restriction of piperacillin-tazobactam was attempted in a retrospective cohort study to limit its use to 72hrs (13). Here, 2 cohorts were compared, one prior to restriction of PTZ, and another one after (where after 72hrs, the order for PTZ is reviewed). Rates of days on PTZ/VAN combination between the cohorts and rates of AKI were compared. The rate of AKI was significantly lower in the post-restriction group compared to the pre-restriction (9% vs 10%, p-value 0.031), though notably only one patient who had PTZ monotherapy in the entire cohort had acute kidney injury.

Given the overall difficulty in high quality data, it isn’t surprising that meta-analyses are a high degree of heterogeneity and high risk of bias. Despite this, 2 meta-analyses of several cohort studies found an association of acute kidney injury, as defined by the rise in serum creatinine, and the combination of VAN/PTZ vs a comparator (either vancomycin alone, combination with another beta-lactam, or combination with cefepime/meropenem).

For instance, a meta-analysis of 15 studies (14), which included 3258 patients, found an association between VAN/PTZ and acute kidney injury:

IMAGE: Is the Combination of Piperacillin-Tazobactam and Vancomycin Associated with Development of Acute Kidney Injury? A Meta-analysis

This was mostly driven by comparing VAN/PTZ and VAN monotherapy:

Although there was a high degree of heterogeneity (I2 = 83.5% for the overall meta-analysis). Having said that, removal of lower quality studies still found a significant association (I2 = 0 with this data set):

It should be noted that many of these studies did not adjust for risk factors for AKI while others did, which biases the results somewhat.

The Bottom Line on Dialysis and Mortality

In the retrospective cohort mentioned previously (6), there was no difference in terms of AKI according to the AKIN criteria in patients who received cefepime or pip-tazo in combination with vancomycin but more importantly, there was a trend towards patients who received cefepime to be more likely to get renal replacement therapy compared to those who got pip-tazo (38.1% vs 18.8%, respectively, p-value 0.277), though this did not reach statistical significance. Moreover, another study that found higher instances of AKI by the KDIGO criteria in critically ill patients (7) did not find any difference in terms of patients requiring RRT in those who got VAN/PTZ, VAN/FEP, or VAN/MER:

In less ill patients, a retrospective analysis (10) also found higher rates of acute kidney injury per AKIN criteria in the PTZ group, but no instances of dialysis:

Similarly, using the RIFLE-AKI criteria (11), the rates of iHD were not different between inpatients who were treated with either combination of VAN/PTZ or VAN/FEP:

Which was also seen in another single-center study evaluating meropenem and PTZ in combination with vancomycin (12):

It is difficult to make sense of this. If we are using any of the criteria that use creatinine to define acute renal injury, then yes, the combination of vancomycin and pip-tazo seems to be nephrotoxic. Yet, after controlling for other nephrotoxins and risk factors for acute kidney injury, there doesn’t seem to be an increase in the incidence of acute dialysis. The argument can be made that the incidence of dialysis is a secondary outcome, and many of these studies were not adequately powered to demonstrate this outcome. For now, given the data at hand, it may be reasonable to restrict how much pip-tazo is used, especially in sicker patients due to the risk of acute kidney injury, with the caveat this may not represent true renal injury given the lack of evidence these elevations in creatinine actually lead to dialysis.

1 comments on “The Nephrotoxicity of Piperacillin-Tazobactam”