By apena17 in #FOAMID, Helminths, Pneumonia, Tropical Medicine on December 13, 2022
No comments 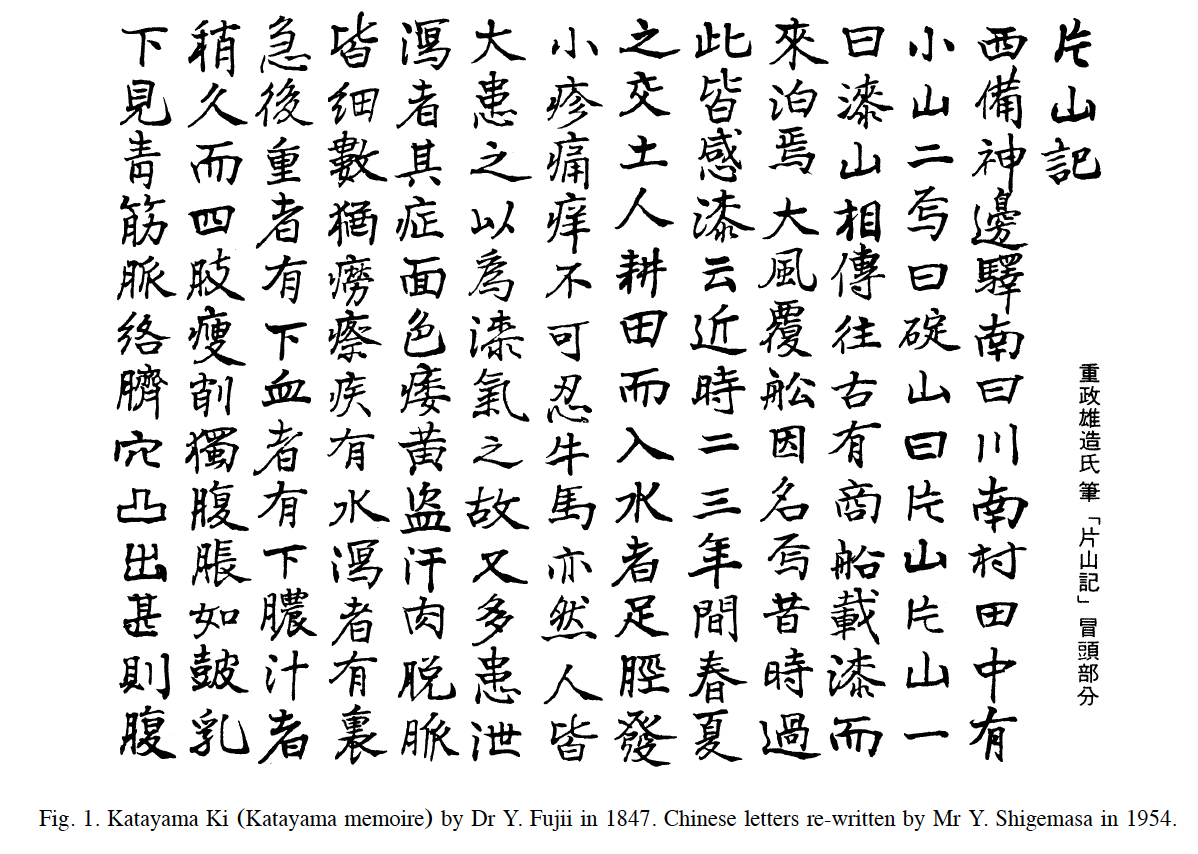 The above is the Katayama Ki or “Katayama memoir” written by Dr Fujii in 1847 which describes the first recorded case of schistosomiasis japonica in the world. The initial description was based on patients from Katayama district, in the Hiroshima prefecture (yes, that Hiroshima).   Subsequently, a committee was formed to evaluate the disease and in 1903, the first evidence of the parasite was obtained from Mr Kenji Kawanishi, who discovered eggs in the stool of a patient. In 1903, Dr Ryuzo Yoshida performed an autopsy study in a patient and discovered parasite eggs in several affected organs. Several other discoveries were obtained via autopsy studies, such as the presence of parasite pairs in portal vein, as well evaluating the mechanism of infection by using 17 cows to demonstrate the dermal infection route  in 1912 (of course, being the early 1900s, someone infected themselves after entering an infected ditch to confirm this route of transmission). Subsequently, it was discovered that snails can act as the intermediate host and soon thereafter, the life cycle of the parasite was figured out. Since then, the prevalence of schistosomiasis in Katayama has decreased to the point it was eradicated:

I hate life cycles but we’ll go over it briefly. Infection in humans occurs when they get into contact with freshwater molluscs (2). These molluscs get infected by contamination with human excreta, however they only thrive in freshwater environment with a temperature of 18C (3):

Upon encountering skin, the cercariae penetrate it and transform into a parasite (aka they change into a schistosomula). They then migrate to the lungs and liver and once they mature into adults, they descend via the venous system to their final habitat (4):

Of course, the final destination of the worms depends on which species of worm it is. The main exception is S. haematobium, which goes to the bladder and can cause hematuria (2,4). Once the adults reach their target organ, they produce numerous eggs that can go into the lumen of their target (intestine or bladder) and get released into the environment. A fraction of those eggs, however, can go through the wall of their respective organ, leading to a chronic inflammatory state and formation of a granuloma.

This one is a bit important. For the most part, acute schistosomiasis is actually a type 1 hypersensitivity reaction, with the severity of disease being tied to the immune response to parasite antigens rather than the parasite itself. This reaction occurs 2 to 12 weeks after initial infection, which matches the larvae migrating and depositing eggs (4). Indeed, the syndrome of Katayama fever resembles serum sickness due to the formation of immune complexes. This is not the traditional teaching, however, of schistosomiasis. Indeed, the classic teaching is that of the chronic stage of disease, which is not the topic of this post however the pathogenesis for chronic schistosomiasis is quite interesting. As a result of the eggs that penetrate the target organs, an acute eosinophilic reaction occurs followed by granuloma formation and then scar tissue. Think of it how cirrhosis ends up turning into hepatocellular carcinoma; too much scar tissue leads to higher risk of cancer, in the case of S. haematobium it would be bladder cancer.

Similarly in the mouse model, complement fixation titer reached a peak at roughly 50 days after initial infection, which matches the known presentation of Katayama fever:

Furthermore, there seems to be a positive correlation between the intensity of infection as well as severity of symptoms and immune-complex levels as measured by isotope C1q binding activity (8):

In a sample of 3 patients, C1q binding activity reached its peak at around 10 weeks after exposure, after which the IgM, IgG, eosinophilia, and egg secretion reduced in correlation with this binding activity, reflecting disease activity:

Indeed one case report notes 3 patients who worsened after initial therapy with praziquantel, requiring prednisone for management. This suggests that symptoms may not be necessarily driven by worm burden but rather something immunological (9).

Now to the meat and potatoes of the post. Two case series reported on the presentation of 34 army recruits who were infected with S. mansoni (10). The most common presentation included liquid diarrhea, abdominal pain, dysentery, hepatomegaly, and nausea/vomiting. When comparing to other similar studies, this cohort ended to have less frequency of diarrhea:

Notably, the number of excreted eggs were only associated with the presence of blood in their stool but not the degree of symptoms. In another study, the same 34 patients were evaluated for cutaneous symptoms (11). Here, 47% had presented with angioedema or urticaria, with most of them presenting roughly 30 days after suspected infection. The delayed nature of the presentation was seen in a retrospective cohort of 14 British men who presented with fever, rigors, malaise, cough, and urticaria two to 5 weeks after swimming in fresh water in Ghana (12).

A case control study found that the predominant pulmonary symptoms of acute schistosomiasis consisted of dry cough (68%) or productive cough (37%) with 87% having some degree of CXR abnormality (13): 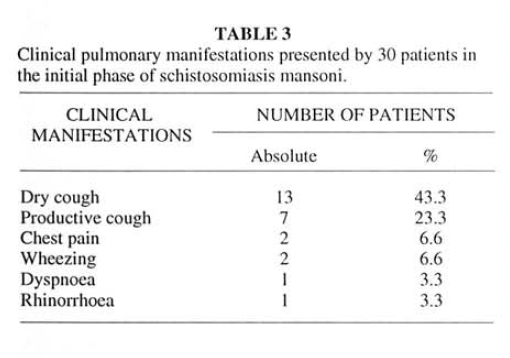 In this cohort, the most common CXR abnormalities included thickening bronchial walls (67%) and beaded micro nodulation (67%). Notably, the degree of eosinophilia did not correlate with symptoms but rather the presence of radiographic changes on CXR however the degree of worm burden was correlated with wheezing and chest pain. A cohort of 23 patients with imported schistosomiasis found the most common symptoms were fever, headaches, myalgias, or respiratory complaints occurring anywhere from 1.5 weeks to up to 9 weeks after the initial exposure (14):

An outbreak of 20 cases that occurred following a safari trip to Tanzania demonstrated that most patients presented with fever, fatigue, and cough (15). This article actually put a nice graph that determines how far after exposure the symptoms came about:

Eosinophilia was the most common lab abnormality seen in this cohort:

In another expedition to Tanzania, 16 patients ended up presenting following exposure with 6 demonstrating symptoms of acute schistosomiasis (16). Here, mean time from exposure to presentation was roughly 7 weeks, with most having significant eosinophilia.

Notably, however, most of the patients did not have a positive stool until much later. In a cohort of 30 Dutch travelers who were exposed by traveling to Mali, 15 had presented with acute Katayama fever (17). Of these, 29 had recalled swimming in a contaminated pool, with median incubation time being 40 days. The most common symptoms were prostration, fever, drenching night sweats, and myalgia:

Here however, the first eggs were seen 45 days after initial exposures, with 18 of these having too few eggs in the patient’s stool to quantify. Notably, in 8 of the patients who were exposed, eggs were still present in patients’ stools even 52 weeks after initial therapy.

While not the topic of this post, in general praziquantel (4) is the therapy of choice, allowing the cure rates to range from 65 to 95% after a single round of therapy. The dosage depends on the species of infecting schistosome, with 40mg/kg for 3 days being the dose for S. mansoni and S. haematobium and 60mg/kg for 6 days for S. japonicum being reported to work, however many will do one dose only (see below). Praziquantel however is not effective against migrating larvae, allowing some to have recurrence. Therapy with artemisinin has been evaluated but not generally used as the areas of endemicity for schistosomiasis matches with those of malaria, leading to concern for the development of resistant malaria.

Notably, some authorities do note the use of corticosteroids (prednisone 40mg/d for 5 days) during the acute setting, given the pathophysiology of acute katayama fever. This is usually administered with praziquantel, however.