Resistance is Futile, For Now – Overcoming Resistance with Ceftazidime-Avibactam

I think we can all agree that resistance is inevitable, despite what the quote says, in the world of infectious diseases. More and more, the use of broad spectrum antibiotics (looking at you, vanco-zosyn!) brings upon more resistant organisms, with beta-lactamases being one of the key methods of resistance in many gram negative bacteria. As you may or may not know, things like clavulonic acid, tazobactam, and sulbactam do not “broaden” coverage, but merely inhibit the certain beta-lactamases to “restore” the susceptibility of the parent antibiotic. Given the rise in other types of beta-lactamases, especially NDM and KPC, these guys may not work much for infections with certain strains of organisms. As a result, in the past few years there has been the release of a new type of beta-lactamase inhibitors into the market: avibactam and vaborbactam.

Here, we will focus on avibactam, which is in the combination ceftazadime-avibactam aka Avycaz (which I will call CAZ-AVI from now on). Ceftazadime is the parent antibiotic, a third-generation cephalosporin with a niche in pseudomonas infections, which makes it a bit different from others in the class (i.e. ceftriaxone) in that respect. The “ESKAPE” organisms (different from ampC producing “ESCAPE” aka E. faecium, S. aureus, K. pneumo, A. baumanii, P. aureginosa, and Enterobacter species) are unique pathogens in that they tend to “escape” the most commonly used antibiotics (1). Many of the gram negatives mentioned tend to produce “beta-lactamases” which hydrolyze the beta-lactam ring of the antibiotic, rendering said antibiotic useless in their presence (1). Several beta-lactamase inhibitors bind to these beta-lactamases, allowing the parent antibiotic to produce its killing effect and bind to bacterial penicillin-binding proteins. Tazobactam, which inhibits class A and some class C beta-lactamases, binds irriversibely to these to exert their effect. One of the unfortunate things about the older beta-lactamase inhibitors is their narrow spectrum of activity in terms of beta-lactamases (2); in general, they do not do much for Class A carbapenamases or Class C. Avibactam, a novel, nonbeta-lactam beta-lactamase has activity against most Ambler Class A enzymes (the carbapenamase component at least), as well as Class C (the “ampC” producers) and some Class D which include carbapenamases. Compared with the more “classical” beta-lactamase inhibitors, avibactam is a non-beta-lactam beta-lactamase inhibitor which has activity against class A, C, and some class D enzymes, allowing a broader spectrum of activity (3). Further, the inhibition process is reversible for avibactam as compared to tazobactam. While this combination, CAZ-AVI restores activity to ESBLs and inhibits several carbapenamases (see later), it has no activity against acinetobacter spp or stenotrophomonas maltophilia as they have different mechanisms of resistance. While this may sound like a bunch of gibberish, it essentially means that you can use CAZ-AVI for ESBL, ampC producers, and some carbapenam-resistant organisms (not all, there are notable exceptions).

Data from the INFORM global surveillance study found that ceftazidime-avibactam inhibited nearly all isolates with ESBLs, amp-C beta-lactamases, or both (4):

In another study, susceptibility rates for ceftazidime-avibactam and comparator agents suggested that CAZ-AVI had higher percentage of susceptible isolates for pseudomonas and enterobacteriaceae when compared to meropenem, though lower when compared to colistin (5):

Not surprisingly, CAZ-AVI is not able to inhibit beta-lactamases associated with acinetobacter so it had little activity.

The above seems all well and good, but we have discussed in the past that breakpoints do not necessarily mean that it will be clinically effective, as this number is a combination of factors that have to take into account the rate of clinical success as well as adverse events. Several major trials have compared CAZ-AVi in a variety of clinical settings. The REPRISE study (6), which was a phase III, randomized trial evaluating CAZ-AVI with best available therapy in complicated UTI or intra-abdominal infections with MDROs. 333 patients were randomized, with most of the comparator group being given meropenem or imipenem. In both cohorts, cure rates were similar (90.9%, 95% CI 86-95 for CAZ-AVI; 91.2%, 95% CI 86-95 for best available therapy):

While the graph above suggests that CAZ-AVI had better outcomes in cIAI, given the low numbers it is difficult to draw any meaningful conclusions. Similarly, the RECAPTURE trial compared CAZ-AVI and Doripenem in patients with acute complicated UTI or pyelonephritis in a randomized, phase III, double-blind trial involving 1033 patients (7). There was no difference between groups in patient assessed symptomatic resolution at day 5 (70% for CAZ-AVI vs 66% for Doripenem, difference 4%, 95% CI 2.39 to 10.42) though favorable microbiological response and test of cure, which occurred at 21-25 days after randomization, favored CAZ-AVI (77% vs 71%, difference 6.44, 95% CI 0.33-12.36). When compared to imipenem-cilastatin, an RCT of 137 patients (8) found that both CAZ-AVI imipenem-cilastatin had comparable microbiological response at the test of cure visit (70.4% in CAZ-AVI and 71.4% in imipenem-cilastatin, difference -1.1%, 95% CI -27 to 25), though very few patients were found to have MDRO (roughly 20). 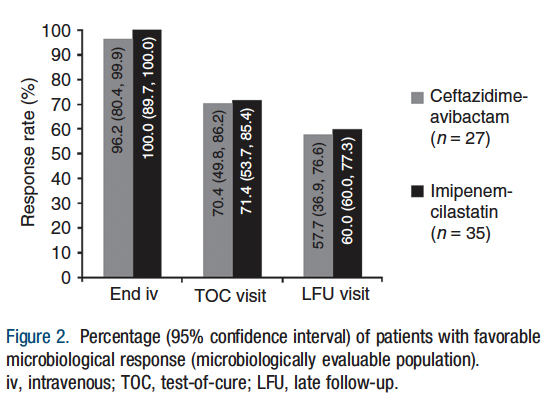 Randomized data for intra-abdominal infections is sparse when compared to urinary tract infections. A double-blind, multicenter, randomized trial evaluated CAZ-AVI/Metronidazole and meropenem/placebo in a 1:1 fashion for complicated intra-abdominal infections (9). Primary endpoint was clinical cure at test-of-cure visit 28-35 days after randomization. 1066 patients were randomized, with non-inferiority primary endpoint being achieved in the modified ITT analysis:

Notably, patients who had moderate renal impairment tended to do better with meropenem. Similar to some of the above studies, only 13% of patients had isolates that were resistant to ceftazidime at baseline, and just above 60 were infected with pseudomonas, making it difficult to drawn conclusions on how they perform on more resistant pathogens:

Only one trial has been performed for pneumonia, though I think this is more applicable to the situations where CAZ-AVI will actually be used in. The REPROVE trial, which randomized 879 patients to either ceftazidime-avibactam or meropenem for nosocomial pneumonia found that in the modified ITT and the clinical evaluable population the clinical cure rates at TOC were comparable between groups (10):

All cause mortality was also similar (9.4% in the CAZ-AVI group vs 7.4% in the meropenem group) and there was no difference in outcomes when stratifying patients by organism.

One of the things you may have noticed is there is little in the way of data as to how this antibiotic is typically used in the clinical setting i.e MDR organisms. This has to do (I think) with the fact it is easier to recruit for more “common” issues such as UTIs than for MDRO infections specifically, and the manufacturer would like to get approval and not risk having a dedicated cohort of super sick patients, who may bias the results one way. Further, I think it may be due to the relative rarity of such infections as well. Despite this, some insights can be gained from teh above studies. When looking at pooling patients with MDR Enterobacteriaceae and Pseudomonas isolates from the above trials (12), favorable responses were seen in both the CAZ-AVI group and the comparator group (78.4% vs 71.6% for Enterobacteriacae and 57.1% vs 53.8% for Pseudomonas).

I think this is where most of the use of CAZ-AVI is going to go into. It should be noted that not all carbapenamases are created equal. In general, CAZ-AVI tends to have activity against KPC-producing Enterobacteriacae, as well as against OXA-48 beta-lactamases (13). A Brazilian study of 307 carbapenem-nonsusceptible P. aeruginosa isolates found that 73% of these were susceptible to ceftaz-avibactam, however it had no susceptibility to metallo-beta lactamases, such as NDM or VIM (14) which tend to be class B:

Indeed, an observational, retrospective study evaluated infections with OXA-48 carbapenamase-producing enterobacteriacae (15). 57 patients were evaluated, of which 46 received monotherapy with CAZ-AVI. All had previously received therapy with colistin plus imipenem, and clinical/microbiological cure were achieved in 77% and 65%, respectively, with all-cause mortality at 14 and 30 days being 14% and 22%, respectively.

From here on, however, data is not as robust and limited to relatively small observational cohorts that used propensity score matching and multivariate regression analysis to draw some conclusions. A small case series (16) of 13 patients with CRE who were treated with CAZ-AVI were compared with 28 control patients, and found that rates of clinical remission, clinical cure at 30 days, and all-cause mortality at 30 days were not statistically different:

In another observational study where CAZ-AVI was used for carbapenem-resistant infections as salvage therapy, 104 cases were compared with 104 controls (17). Cases tended to be younger, but also more likely to have SOT and have higher co-morbidity indices:

day mortality was lower in the cases (36.5%) compared to controls (55.8%, p = 0.005) with multivariate analysis finding that any regimen that contained CAZ-AVI was associated with lower 30-day mortality:

A multicenter, retrospective, observational cohort involving 203 patients with CRE or MDR Pseudomonal infections found that initiation of CZA within 48 hours was associated with lower mortality in multivariate logistic regression analysis (18):

How well does CAZ-AVI perform against, lets say, colistin? A prospective, observational study, CAZ-AVI was compared to colistin in carbapenem-resistant enterobacteriaceae (19). 99 received colisitin while 38 received avycaz, of which 97% were infected with K. pneumo. All cause mortality was lower in the CAZ-AVI group (8% vs 33%), which remained significant after IPTW adjustment (9% vs 32%, p=0.001). Probability of better outcome was better for CAZ-AVI (64% probability)

Another retrospective, multicenter study evaluated CAZ-AVI and colistin in patients with CRE bacteremia (20). Primary outcome was 14-day mortality. 61 patients (32 in Avycaz and 29 in colistin) were evaluated. 14 day mortality was lower in the CAZ-AVI group (19% vs 31%), though this was not statistically significant. Ceftaz-avibactam was associated with a lower 14-day adjusted mortality, but this pattern did not hold true for 30 day adjusted mortality.

A retrospective study (21) evaluated both tigecycline and CAZ-AVI for CR K. pneumo HAP/VAP and found that cure rate was higher in the CAZ-AVI group (51% vs 29%, p=0.022), as was microbiological cure rate (74.4% vs 33.9%, p < 0.001). 28 day survival was not statistically different, however (69.8% for CAZ-AVI vs 66.1% for tigecycline). Despite this, multivariate analysis found that CAZ-AVI was associated with higher clinical cure rates and microbiological success, though there was no association with 28-day survival: