The Microbiology of Diabetic Foot Infections – What I Didn’t Know

This and (likely) the next post are a product of questions I got asked. For instance, do you need anaerobic coverage for diabetic foot infections? Depends, but see later. What organisms do you need to cover for cellulitis in those who have had water exposure? Cephalexin and quinolones, with some exceptions. We will talk about the first topic here. Anaerobes are weird in the sense we may misattribute some common presentations to them. For instance, during aspiration pneumonitis, people tend to want to cover anaerobes despite the fact they do not play a role (but in abscesses in patient’s who are at high risk of aspiration, they are a key player). Similarly, in diabetic foot infections they may not even be isolated. But diabetic foot osteomyelitis is a different story. The overall point here is that the latter presentation in both instances represents an area of low perfusion and as such, low oxygen tension.

This is at least how I think about it. The reality of it is that we do not truly know if anaerobes play a role in the pathology, as you need to have fairly strict conditions for these organisms to grow (i.e. you need to keep the specimen in low oxygen environments to maximize growth). Despite this, anaerobic bacteria are thought to play a major role in the pathophysiology of diabetic foot infections. The guidelines for diabetic foot infection (1) do state that coverage is warranted in chronic previously treated, or severe infections. So how prevalent are anaerobes? One major review notes that, in those who have mild infection without prior antibiotic therapy, Staphylococcus aureus and beta-streptococcus tend to be the predominant pathogens (2). Chronic wounds, especially those who have undergone antibiotic therapy, tend to be polymicrobial with both gram-negatives and anaerobic bacteria being frequently cultured. Despite this, however, it seems that staphylococcus and aerobic bacteria tend to be the most commonly cultured organisms. As a preview to this post (and honestly, if you see this table, you will get the gist without reading further), gram positives tend to make up the bulk of organisms cultured from all diabetic foot infections (3):

So what is the microbiology of diabetic foot infections? Do you need to cover anaerobes? Keep reading. Or see above, though some reviews suggest that the microbiology may change depending on where you live in the world.

In general, the longer the diabetic foot wound is infected, the more likely it is to have many organisms playing a role: i.e. it is a polymicrobial infection. The idea is, that as the infection gets deeper and more chronic, more pathogens will play a role. Anaerobes are a question we still are debating, however. One early cohort of 32 patients found a total of 154 isolates, of which 63 ended up being anaerobes (4). Notably, there was no statistical difference in the number of isolates grown from swabs preamputation and postamputation, suggesting that antibiotic therapy did not change the number of isolates recovered:

Interestingly, when anaerobes were present, they accounted for a greater bacterial count than aerobes (mean 7.52 log10 vs 6.06 log 10). Further, curette-specimen culture seemed to correlate better with deep tissue samples than swabs (see later). The role of anaerobes seem to be confirmed in a later prospective study from Indiana, where reliable specimes (those obtained from ulcers, abscess, bone, soft tissue) were compared with  unreliable specimens (those who could not be obtained without contact with the ulcer) in 131 patients (5). In the reliable specimens, Staphylococcus accounted for 64% of isolates, followed by streptococcus (30%), enterococcus (26%), corynebacterium (18%), Enterobacteriaceae (42%) and pseudomonas (7%). Anaerobes were also isolated frequently in the reliable specimens, with peptostreptococcus (36%), bacteroides fragilis (9%), and Clostridium spp (6%) being isolated. Moreover, a 1995 review noted that anaerobes were cultured from complicated infections at a rate of 31%, compared to only 22% in cases of osteomyelitis perhaps reflecting inadequate handling of specimens (6). In a cohort of 52 patients, of which 67% had osteomyelitis, 74% were found to have anaerobic bacteria with peptostreptococcus making up the majority of isolates recovered (7):

These early data suggest that, in some ways, anaerobic bacteria play a major role in these infections. Importantly, Staphylococcus aureus is cultured the vast majority of the time with pseudomonas popping up in a not insignificant amount of cultures. This seems to be the pattern as the data piles on.

A 2005 study confirmed similar findings in terms of microbiology of foot infections (8):

These findings were largely confirmed in a large, prospective, multicenter trial of 454 specimens, of which 44% were found to harbor four or more organisms, with roughly 83% being polymicrobial (9). 80% of aerobic organisms cultured were gram positive, with the predominant species being Staphylococcus aureus with 77% being MSSA. Gram negative rods accounted for 20% of isolates, with Pseudomonas being the predominant isolate. Notably, 49% of patients harbored anaerobes:

Similarly, in an Indian cohort of 434 hospitalized patients with diabetic foot infections (11), 66% of samples obtained on the first culture were polymicrobial,with gram negatives being the predominant type of organisms cultured (25% vs 15%). Notably, anaerobes only made up 0.7% of all organisms grown in culture, with Pseudomonas making up 17% and S. aureus making up 14% of cultured organisms.

Another study of 253 patients from Kuwait found that 92% of these were polymicrobial (12). One of the interesting things of this study was that the rate of pseudomonas increased with the higher grade of wound, suggesting deeper infections with ischemia tended to be infected by pseudomonas:

A prospective Malaysian study of 550 patients found that Pseudomonas accounted for 19% of isolates, Staph aureus 11%, MRSA 8%, and Bacteroides 8% (13). The frequency of anaerobic isolates across the cohort was 22%, which was not insignificant. A retrospective cohort of 73 Scottish patients similarly found that the most commonly isolated organism was staphylococcus aureus, though surprisingly, 62% of specimens were monomicrobial (14):

The rate of S.aureus isolation was not influenced by gender, anatomical site, or sample material (either bone vs swab).

Indeed, Staphylococcus aureus was found in 33% (200) of all samples, and it accounted for 84.4% of the monomicrobial results.

Two larger reviews seem to confirm these findings. A Turkish review of 31 studies totaling 2097 patients found that staph aureus accounted for the largest proportion of organisms, with no significant changes in the rate of isolation over the two time periods of studies dating back to 1989 (15). Notably, the rate of anaerobic bacteria growth was fairly low, however it should be noted that methodology and methods of culture were vastly different between studies and only 40% of studies performed anaerobic cultures:

A 2021 meta-analysis of 112 studies evaluated microbiological prevalence of over 16,000 patients (16). The three most common isolates grown in aerobic media were Staphylococcus aureus, Pseudomonas spp, and E. coli, followed by Proteus spp, Klebsiella spp, and Enterococcus spp:

In anaerobic media, similar results were seen, however only Bacteroides and Peptostreptococcus had any significant frequency:

The lesson here is 3-fold:

The above data is based on culture data, which is affected by the culture medium that is used to grow bacteria as well as the method used to obtain the sample. More recently, sequencing studies such as those that employ 16S sequencing have shed light into the diverse microbiome of diabetic foot infections. One interesting study evaluated the microbiome in 20 patients using 16S sequencing, which found well over 41 unique genera (17). In other sequencing studies of 39 patients, infections that were shorter than 6 weeks were more likely to have one predominant bacterial species while those greater than 6 weeks were diversely polymicrobial (18). 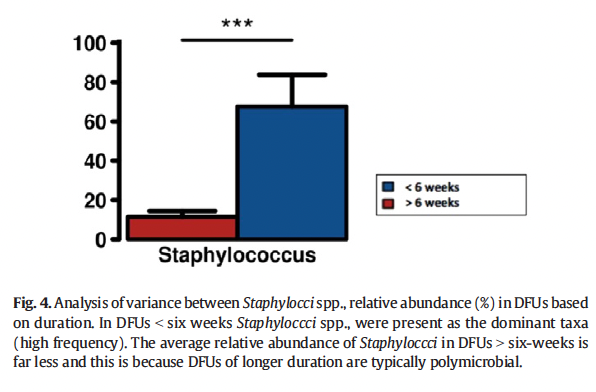 In one study of 43 patients, culturomics was used to analyze the microbiome of diabetic foot infections (19). Aerobic gram positive bacteria were the most commonly isolated (55%) followed by aerobic gram negatives (26%) and strict anaerobes (19%). Staph aureus (53%), E. faecalis (45%), S. lugdunensis (19%), and S. epi (11%) were the ost common gram positives, with E. cloacae (23%), and Proteus (11%) being the most common gram negatives. Similarly, a study compared the results of deep tissue culture with 16S RNA sequencing and metagenomics in 62 wound samples from 31 patients (20). Of these, 23 underwent amputation, with the mean number of bacteria per ulcer being around 4. Gram negatives made up 51% of organisms, with 16S sequencing detecting more anaerobes than conventional cultures:

Notably, those who had conservative management tended to grow more staphylococcus aureus while those that underwent amputation tended to grow Bacteroides spp. 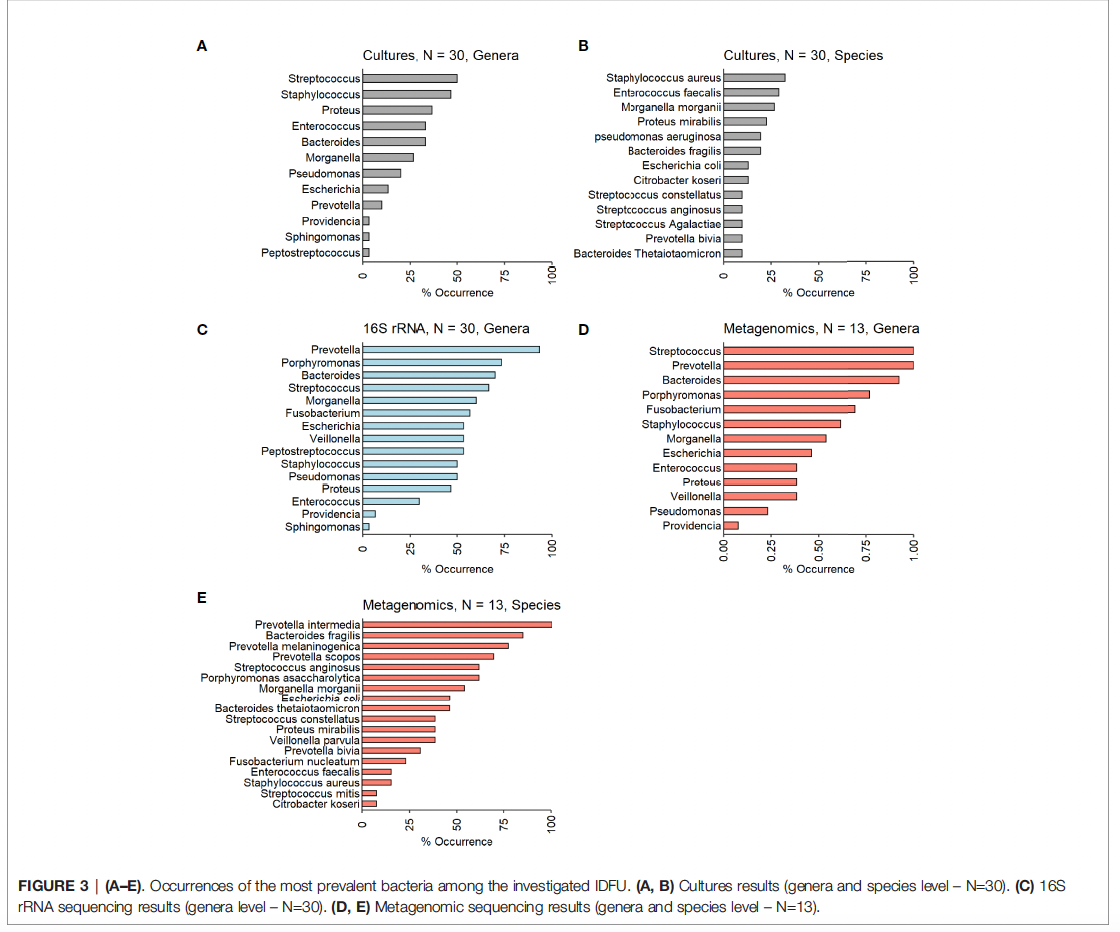 A 2008 study compared the microbial diversity in chronic venous stasis wounds, pressure wounds, and diabetic wounds (21). Not surprisingly, all types of wounds tended to grow Staphylococcus, Pseudomonas, Enterobacter, Serratia, and Finegolida. Using pyrosequencing to evaluate the distribution of bacterial population in relation to aerotolerance, pressure ulcers had the highest proportion of strict anaerobes, followed by diabetic foot infections:

How much of a role these pathogens play in diabetic foot infections remains unknown, however it is believed they may play a role in establishing microbiomes as well as the production of biofilms. Nevertheless, it may be that anaerobes are actually an important player that are underestimated due to lack of significant growth in other mediums.

This is a fairly controversial topic. In general, if you are able to get culture from the deep tissue you are better off, however there may be a role for superficial swab cultures. One of the earliest studies compared the microbiology of bones and soft tissues (22). In this cohort of 36 patients, only 36% of soft tissue cultures matched correctly the corresponding bone specimen exactly, with more pathogens being found in soft tissue than in bone:

A prospective study (23) found that swabbing allowed for identification of microorganisms corresponding with deep tissue biopsy in 9/10 patients with grade 2 wounds (mild infections). The correlation decreased with worsening infected wounds (41% in grade 3 and 41% in grade 4).

Notably, only E. coli and Morganella showed the highest concordance between swab and bone culture:

One of the largest cohorts came from Italy, where a total of 4332 samples from 1295 patients were collected at the first visit (25). Aspiration specimens were more likely to yield positive cultures when compared to swabs or tissue specimens (72.4% vs 60% vs 50.3%). 40% of these were polymicrobial, with gram positives being the most commonly isolated organisms (53%), followed by Enterobacteriacea in 24%, Pseudomonas in 10.3%, and anaerobes only in 0.3% of cases:

One study of 401 patients found that the correlation between swabs and tissue cultures was highest for Staphylococcus aureus (including MRSA), Streptococcus, and Pseudomonas (27):

So perhaps swabs may not be a terrible idea, as it will allow you to see faster if you need to cover for MRSA or pseudomonas.