Urine Dipstick, Urinary Tract Infections, and How It Should Be Used.

I have a love-hate relationship with the urinalysis. It is one of the cheapest and quickest way to get a good idea of what is going on in the kidney, from its less used specific gravity, to the more well known microscopic examination that may involve the presence of casts, it is a widely available and used test out there. The dipstick provides an easier way to evaluate urine, by literally “dipping a stick” into the sample, which gives you valuable information. These include the leukocyte esterase and nitrates, which are typically associated with urinary tract infections. The definition of urinary tract infection includes the presence of pyuria (or white blood cells in the urine sample) or bacteria, leukocyte esterase or nitrite positive on dipstick, along with symptoms which can include dysuria, hematuria, urgency, or frequency. One thing I have found is that many folks will say someone has a “urinary tract infection” with only a positive dipstick despite the lack of symptoms. This becomes more frequent in elderly people who come in confused or who cannot talk, with the only positive data point being a positive dipstick.

We should probably talk about the dipstick. When we look at this, in the context of looking for a UTI, we are looking for two important variables: the presence of white blood cells (i.e. pyuria) and the presence of potentially pathogenic bacteria (i.e. nitrite). The excretion of 400,000 leukocytes/hour is associated with symptomatic UTI, with lower values not typically seen in symptomatic patients (1). This has been found in older studies to correlate with >10 leukocytes/mm3 of urine in sediment, which is typically seen with bacterial counts of 105 CFU/ml. In other words, when urine is spun, seeing 10 leukocytes/mm3 correlates with bacteriuria that is significant. Leukocyte esterase, which is used as a surrogate for white blood cells in the urine, is the enzyme found in neutrophil granules that reacts with a reagent in the dipstick, producing a blue color if positive. This correlates with both bacteriuria and white blood cells in urine, with a quoted sensitivity ranging from 75 to 96%, and specificity of 94 to 98%, yielding a PPV of  50% with a NPV of 92%. Pyuria may not be detected due to infections with certain bacteria such as Proteus, Klebsiella, and Pseudomonas due to disintegration of WBC caused by the alkaline conditions these species produce (2). The other component that is measured in the dipstick are nitrites. Nitrite, measured by the action of bacteria on dietary nitrate, is used as a surrogate for bacteriuria though organisms such as Staphylococcus, Enterococcus, and Pseudomonas do not produce a nitrate reductase leading to a false negative (2). Diuretics, which lead to insufficient urinary nitrate levels, can also lead to a false negative.

The urine dipstick is a pretty useful tool to at least rule out the disease in the right clinical setting i.e. the patient is having symptoms. Indeed, when compared to the gold standard, which is urine culture, the dipstick allows you to get a quick answer as to whether or not there is bacteria in the urine. This has been looked at in several studies in a variety of populations. In a cohort outpatient study involving 434 women, nitrite positivity on dipstick was found to be the most predictive of UTI in those who had symptoms (3):

When looking at symptoms, dysuria had the higher OR to predict UTI, followed by nocturia:

Notably, this cohort all had positive symptoms of cystitis, namely dysuria. In one large study of 5218 urine specimens, leukocyte esterase detected 68% of specimens with >105 CFU/mL, while nitrite detected 44% of those with the same degree of bacteriuria (10). The overall sensitivity and specificity was increased with both studies together, with higher breakpoints leading to overall similar sensitivity and specificity, but higher NPV:

In a cohort of 635 patients with positive urine culture found that nitrites were only 23.3% sensitive for the diagnosis of UTI (5). Notably, 63% of cultures were found to have E. coli:

One thing to note is that even the combination of leukocyte esterase, bacteriuria, and nitrites did not have a 100% PPV or sensitivity, though this was only measured against the presence of growth in urine culture rather than symptoms. In a cohort of 655 elderly patients, urine dipstick was compared to urine culture, where the specificity of both nitrite and leukocyte esterase was high and yielded a reasonable, at the expense of sensitivity (7):

When both were negative, the NPV was 88%, suggesting that it may be a reasonable tool to rule out a diagnosis of at least ASB.

As you can see, this test is not quite “perfect” to rule in a UTI. This finding has been corroborated in several meta-analyses. In one meta-analysis of 70 publications (8), the sensitivity of nitrites ranged from 45-60%, while specificity was higher at 85-98%. Sensitivity for leukocyte esterase was higher ranging from 48-86%, with lower specificity (17-93%). The combination of both studies had higher sensitivity (68 to 88%). This varied depending on the population and who does the test, with sensitivity being higher for family practice and emergency setting, and higher in the urology population: 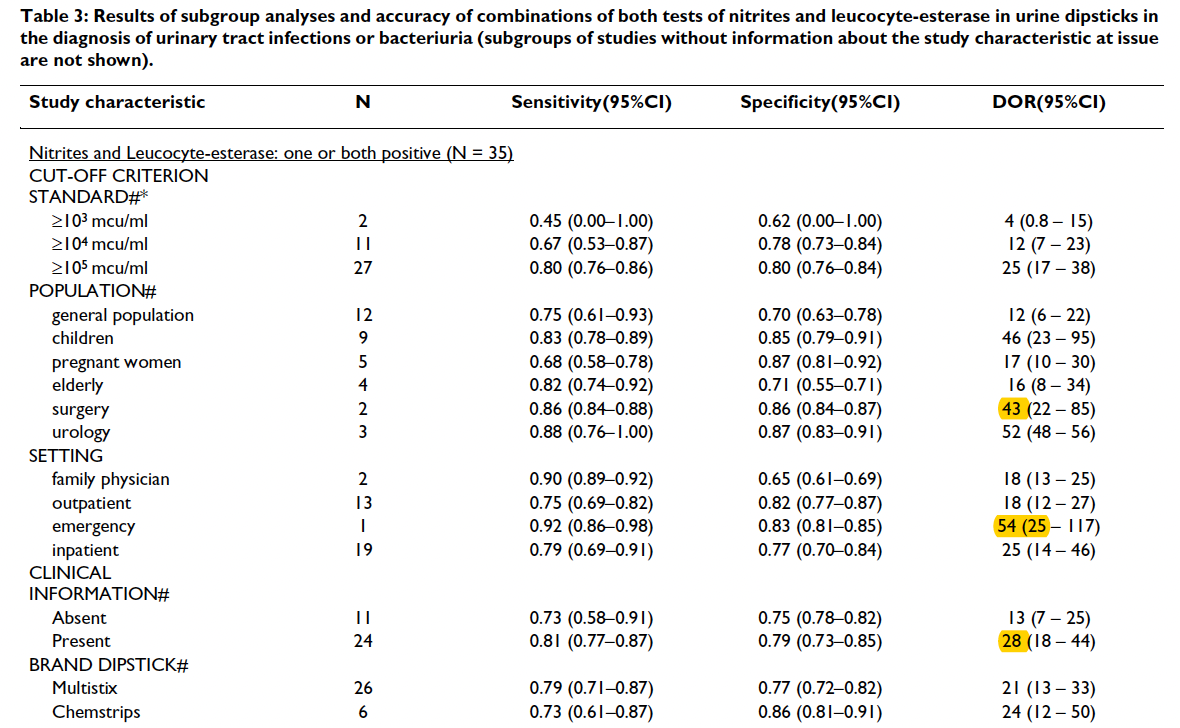 In a meta-analysis of 23 studies found that the highest likelihood ratio occurred in those who had both positive leukocyte esterase or nitrates, though nitrates overall had higher specificity for a diagnosis of UTI when compared to urine culture (9):

The answer is: it depends. You have to take into account that many of the patients studied probably did not have the classical UTI symptoms. Further, E. coli is not the only pathogen that causes UTI which complicates the utility of nitrites as well. Add that to the fact that many patients use diuretics and may be colonized without having symptoms, and the utility of the dipstick in ruling in a diagnosis becomes a bit dubious at best. Indeed, asymptomatic bacteriuria (ASB) is quite prevalent as is pyuria. In a cohort of young women, pyuria was present in 16% of episodes of asymptomatic bacteriuria compared to 94% of those with symptomatic UTI (11). The prevalence of asymptomatic bacteriuria was 5-6%, with 8 percent of those being followed by symptomatic UTI within a week. In one cohort of elderly women, 23% of women had any degree of bacteriuria (12). Of the 46 who had high-titer bacteriuria, 94% had pyuria compared to 64% of those with low-titer bacteriuria. A small cohort of 76 elderly institutionalized found that 88% of them had some degree of pyuria, with dipstick leukocyte esterase being positive for 71% of those with pyuria and 28% of those without pyuria (13). On the other end, some patients with suspected UTI may not have both components. One cohort of 399 episodes of suspected UTI found that only 37% had pyuria and bacteriuria (14). Further, age (RR 1.03, 95% CI 1-1.05), female sex (RR 2.69, 95% CI 1.54-4), change in character of urine (RR 1.46, 95% CI 1.14-1.79) were factors associated with pyuria and bacteriuria, though notably mental status change was not a factor that was associated with this finding.

Despite my insistence that a “positive dipstick” does not equal a UTI, one of the prevalent practices is the diagnosis of a UTI in the setting of a positive dipstick in an elderly, confused patients. Of course, it is difficult to get a clear story when someone is altered, so this is used as a symptom of UTI. It should be noted, however, that localized cystitis does not typically produce systemic symptoms (15) and if they are present, you should probably look for something more serious like pyelonephritis. This isn’t to say there is a correlation between altered sensorium and ASB. In one cohort of 551 elderly patients, dysuria, change in character of urine and change in mental status were associated with higher incidence of bacteriuria and pyuria (16):

Of these, notably only 228 had clinically suspected UTI at any point. The combination of all 3 factors yielded a higher probability of bacteriuria and pyuria, however it should be noted this was not diagnostic for UTI:

In a cross-sectional study, the presence of confusion and “not being themselves” in patients within 3 months of the test was associated with the presence of bacteriuria, however the etiologic predictive values suggest that none of the statistical findings had any clinical relevance (17):

Several studies have attempted to look at this relationship. An old randomized study of patients over 65 evaluated the use of norfloxacin vs placebo in the treatment of asymptomatic bacteriuria 58 patients were randomized, and found that their Crighton Behavioral Rating Scale scores were not influenced by treatment (18):

A prospective study of patients over 70 year old who had delirium in a hospital found that treatment of asymptomatic UTI (described as dysuria, frequency, suprapubic tenderness, CVA tenderness) in delirious patients was associated with worse functional recovery (RR 1.30, 95% CI 1.14-1.48) in univariate analysis as well as multivariate analysis (aOR 2.62, 95% CI 1.35-5.09) when compared to other delirious patients without asymptomatic bacteriuria (19). When comparing those who had bacteriuria and were treated vs not treated, there was no relationship between treatment and functional recovery (uRR 1.10, 95% CI 0.86-1.41) suggesting no benefit of treating asymptomatic bacteriuria for the reason of delirium. So there is perhaps no benefit in treating ASB in delirious patients. Several cohorts have attempted to find a link between confusion and positive urine dipstick.In a cross-sectional study of 425 nursing home residents found that more patients without symptoms such as confusion or aggressiveness were likely to have a positive urine culture, suggesting a lack of relationship between these factors (20):

A Canadian study of 335 patients eligible patients (21) found that those who were febrile were more likely to have negative urine cultures (OR 7.40, 95% CI 2.08 to 26.28), while those with urinary symptoms were more likely to have a positive urine culture (OR 1.58, 95% CI 0.99 to 2.52). Notably, when comparing those who had symptomatic UTI and asymptomatic UTI, a significant portion of both cohorts presented with altered mental status or confusion (66% for ASB vs 56% for UTI). While confused patients with ASB were more likely to be treated with antibiotics than those without confusion or AMS (OR 1.82, 95% CI 1.19 to 4.12) there was no difference in mortality between those who had UTI vs ASB (2.9% vs 1.9%, p 0.89). One study of 551 participants found that only antibiotic utilization was associated with bacteriuria after adjustment, with change in mental status not reaching statistical significance after this adjustment (22):

Overall, there is little relationship between confusion and urinary tract infections, and the dipstick is more useful when negative as it effectively rules them out. Makes me feel less excited about a positive dipstick.