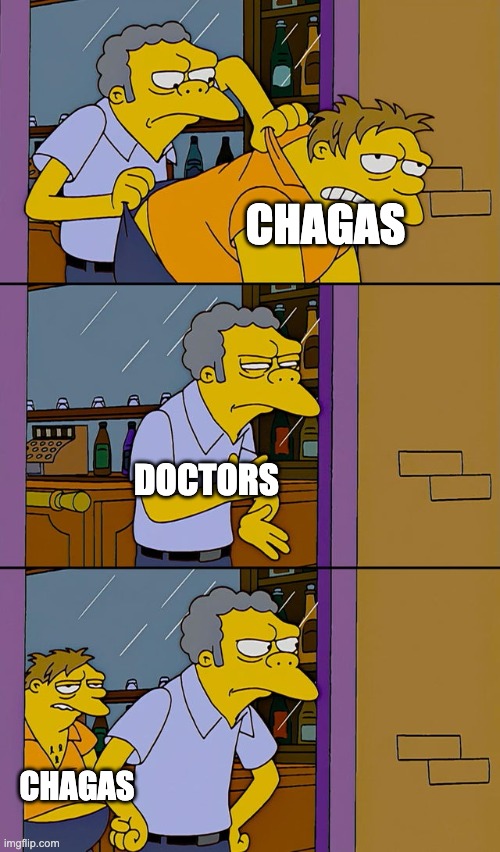 Chagas Disease Reactivation – What to Watch Out For

Primary infection with T. cruzi, also known as American trypanosomiasis, is generally asymptomatic with a small percentage having non-specific symptoms such as fever, malaise, lymphadenopathy, and in certain cases, a Chagoma. The vast majority of people go on to develop an “intermediate” form of the disease, where serology is positive but there is no sign of end-organ damage. An even smaller percentage will develop chronic Chagas, which is marked by positive serology and signs of cardiac or gastrointestinal damage. Look at the previous post, if you want to know more about Chagas cardiomyopathy. There, I implied that part of the pathophysiology of Chagas cardiomyopathy may lie in low-level parasitemia that induces some degree of immune dysregulation and thus, chronic Chagas disease. Given the role of the immune system in controlling the infection, it would stand to reason that those who become immunosuppressed will go on to develop “reactivation” of the disease, marked by increased parasitemia and severe signs of primary infection. The severity of reactivated Chagas tends to be more severe, with manifestations ranging from meningoencephalitis, myocarditis, and skin lesions (1). Therapy tends to be done with benzinidazole, but the duration is not standardized. For now, I’ll focus on the major presentations seen in some immunocompromised states.

The incidence of reactivation is unknown, however as noted, patients with immunosuppression have more severe clinical course (2), however necropsy studies have demonstrated myocardial inflammation and parasitemia in absence of clinical symptoms. CNS reactivation is marked by altered mental status, focal neurological weakness, meningismus, and seizures (3, 4). One review noted that 75% of reactivation in HIV patients occurs in the CNS (5). The largest cohort of CNS chagas in HIV patients evaluated 15 patients over a 15 year period (4). No patient was on ART and 3 had reactivation while on high dose steroids:

Three of these patients had concomitant cardiac involvement. Notably, brain MRI ring-enhancing lesions were fairly common, with single supratentorial location being the most prevalent:

Mortality was high in this cohort, with 79% dying on follow up with a median time of survival of 21 days. 12/15 patients were treated with oral benznidazole (4). In general, it seems that single or multiple hypodense lesions with or without ring enhancement can be seen, usually in subcortical areas (5), with one review noting the presence of four hypodense lesions in an AIDS patient and another autopsy study finding necrosis of the right cerebellum (6). In one cohort of 11 patients, 4 were found to have meningoencephalitis with fever, headaches, and seizures being the main manifestations (7), with another patient presenting with disorientation and CNS abscess (8). CSF findings tend to be non-specific, but elevated cell count (mostly lymphocytes), high protein and glucose are typical findings. In one example CSF, findings were as follows: 90 cells/mm3, glucose 51mg/dL and protein 83 mg/dL (9). The next most common presentation is myocarditis, with 44% of patients presenting with either acute heart failure or arrhythmias (5). Another cohort (7) found that 4 patients presented with acute cardiogenic shock, ventricular arrhythmia, and heart failure. Direct microscopic evaluation of serum was able to diagnose myocarditis in 3 patients from a cohort of 18 patients (10) and it seems that the progression of disease is much faster in immunosuppressed individuals (11).

Reactivation seems to also impact both parasitemia (obviously) and viral load. This was found in one patient who had a rise in their viral load, despite being on ART (12):

A study comparing Chagas disease in 29 HIV positive patients and 81 HIV negative patients found that T. cruzi parasitemia was more frequently found in those with HIV by xenodiagnosis or direct microscopic examination as well as blood culture positivity (13):

Therapy for reactivation in HIV patients is similar to that of acute or indeterminate (2), with duration between 60-90 days. One review notes therapy through immunosuppression, though it is not clear if this means until immune reconstitution (similar to fluconazole therapy) or lifelong (15).

Reactivation is also seen in solid organ transplants. A cohort of kidney transplant patients found the rate of reactivation was 22% for those who had chagas prior to transplantation and 18% for those who received an organ from a Chagas donor (16). Most of the manifestations involved skin lesions, with 2 patients having erythema-nodosum like lesions, and another one presenting with non-specific fevers. All had parasitemia, with monitoring being the main way they were detected. The time frame here ranged from 37 days post transplant up to 3 years.

Similarly, a kidney transplant patient with positive pre-transplant serology demonstrated skin lesions 3 months post transplant (18). Similar to HIV patients, however, high-degree AV block (19), myocarditis, and meningoencephalitis can be seen in transplant cohorts. Due to the risk of reactivation in solid organ transplant patients as well as the implications behind both reactivation and rejection, several strategies for diagnosis and prophylaxis have been implemented. For instance, one cohort proposed a pre- and post-transplant strategy as follows (19):

As you can see, PCR tends to be the test of choice in these instances. Serology is useless in Chagas patients who are recipients, and isolation of T. cruzi from blood is not pathognomonic for reactivation (20). The strout test (which is a method of concentrating blood by centrifugation RBCs away, concentrating all parasites in the sediment, and discarding the supernatant) is another option here. Since PCR is easier to perform, this has been a go to test for the purposes of reactivation. A cohort of 10 transplant patients used PCR for monitoring reactivation (21). Within this cohort, 5 patients were diagnosed with reactivated Chagas via xenodiagnosis, with 4 having skin manifestations and a fifth having myocarditis. Notably, PCR with kinetoplastid genome was positive ~35 days prior to clinical manifestations (though 4 of these were on previous endomyocardial biopsy specimens) and the spliced leader gene PCR being positive 7 days after the first PCR. This suggests that PCR can be a useful tool to monitor and preemptively treat reactivation prior to symptoms, similar to CMV reactivation. The US CDC also implemented PCR for their monitoring program (22). Here, they took a look at 31 patients looking at serologies and PCR testing using the following schedule: weekly testing for months 1-2, biweekly testing for month 3, monthly testing for months 4-6, and additional testing beyond 6 months with an increase in immunosuppression or febrile episodes.19 patients developed laboratory evidence of reactivation, with the median time from transplant to detection of 3 weeks. Of these, 18 were diagnosed with PCR prior to development of symptoms and all received treatment.

As is to be expected, the degree of immunosuppression plays a role in the chances of reactivation. One cohort of 59 patients with chagas cardiomyopathy found that the rate of reactivation was 29% (23). This seems to have been associated with the degree of immunosuppression, as the first 10 patients who underwent transplant had a dose of cyclosporine averaging 6.70mg/kg/d, compared to a reduction to 2.79mg/kg/d. This led to a reduction of episodes per patient from 2.3 to 0.5. Not only the degree of immunosuppression, but the type of drug use may have an impact. In a cohort of 39 patients who underwent OHT for cardiomyopathy, 24 were given azathioprine and 15 MMF. While survival was equal in both groups, chagas reactivation rates were higher at 1 year and 2 years in the MMF group (8% and 12% for the azathioprine group vs 75% and 81% in the MMF group, HR 6.06). Multivariate analysis found that MMF was an independent predictor of reactivation (p < 0.0001).

While the impact of therapy in chronic chagas is still debated, there is some data that suggest prophylaxis in high-risk patients may be worht wile. One retrospective study found the rate of reactivation was lower in the cohort who got prophylaxis (11% vs 46%). Multivariate analysis found that prophylaxis was associated with lower incidence of reactivation:

This suggest that both, a test and treat approach, or prophylaxis can be used in solid organ transplant, however the duration of treatment remains to be seen.

Several case reports have noted reactivation of Chagas in several hematological malignancies. For instance, reactivation has presented following BMT as progressive fever, anemia, neutropenia, increased LDH, and high CRP in a pediatric patient on day +46 (26) as well as after therapy for acute lymphocytic leukemia with nonspecific presentation (27). In another patient (28), reactivation presented as a series of multiple painful erythematous macules and plaques throughout the cheek, trunk, thigh, and feet in  a patient who underwent allogeneic BMT for CML. Notably, previous to the reactivation, the patient was treated for hepatic GVHD and received infliximab and methylprednisolone, putting them at higher risk.

Sepsis, pericardial effusion, and diffuse parasitemia in a patient with ALL following BMT (29) and myocarditis and encephalitis in another patient following cord blood transplantation have also been reported (30). Interestingly, the latter case occurred after engraftment.

One group proposed screening patients with Chagas disease via parasitological methods prior to BMT and then post-BMT weekly during the first 2 months, then every 2 weeks during the third month and then monthly (31). In those who did not have Chagas and were transplanted by donors with the disease, the donors received a 30 day course of benznidazole prior to donating. Overall, using this approach, 2 patients who received autologous BMT had reactivation without symptoms, 4 who underwent allo-BMT had reactivation with only one having skin lesions, and there were no reactivation in the cohort of 3 patients who got transplanted from a Chagas positive donor (31).

Overall, any type of immunosuppression confers risk of reactivation in those who have chronic Chagas. While serology may be useless for screening, PCR may be worth to evaluate for reactivation. Most presentations tend to be more severe manifestations of those seen in acute Chagas, either meningoencephalitis with brain lesions, or severe myocarditis causing cardiogenic shock or arrhythmias. Watch out for skin nodules reminiscent of erythema nodosum. While benznidazole remains the treatment of choice, the duration of therapy remains unclear.