PJP in AIDS-Patients vs non-AIDS Patients

Consider this post a continuation of the prior one on prophylaxis. I mention a bit on the pathophysiology, where adaptive immunity seems to play a key role in the way the body deals with the fungus, with mice with SCID infected with pneumocystis not being able to mount an inflammatory response. As a result of the lack of inflammatory response, they do not have significant hypoxia and are not as ill as those with neutrophils hanging around. Given our experience with COVID, I think it stands to reason that those whose humoral immune system is defective and are not able to mount an inflammatory response will not have a severe presentation. In general, patients who are HIV positive tend to have a more insidious presentation when they come in with PJP, usually having longer durations of symptoms and progressive dyspnea (1). This is in contrast with the non-HIV immunosuppressed folks that are infected with PJP, who come in after a few days of symptoms and rapidly progress to respiratory failure. The presentation in the latter is more fulminant and is associated with a higher mortality rate.

One of the earliest studies evaluated episodes of PJP in 46 patients with AIDS and 39 patients  in other immunosuppressive disorders (2). While there were no differences in frequency of presenting symptoms such as subjective fever, chills, dyspnea, cough, and chest pain, AIDS patients tended to present after roughly 28 days of illness compared to 5  days in the non-AIDS group (p=0.0001). Moreover, more patients in the non-AIDS group were febrile (92% vs 76%) and had a higher respiratory rate (26 vs 24), but AIDS patients were more likely to be hypoxic at room air and have lower A-a gradients (41 mmHg vs 59mmHg in the AIDS and non-AIDS, respectively). Histological analysis revealed that fungal density was lower in the non-AIDS group, with that group having 12/32 patients being quantified as having “few” fungi, compared to 3/30 in the AIDS group. An ICU-based study (3) evaluated 72 cases of PCP in 45 HIV positive and 27 HIV negative patients. Those patients who were HIV negative had shorter duration of symptoms prior to ICU admission, higher SAPS-II score (reflecting more severe disease), and lower P/F ratio compared to the HIV-infected counterparts:

These findings were confirmed in a large, multicenter cohort of 544 patients (4). 223 of these patients had AIDS, with duration of symptoms in that group being longer compared to the non-HIV group. Further, the latter group were more likely to present with shock:

The difference in the presentation, as noted earlier, may be due to the more robust inflammatory response in the non-HIV patients. Why this is the case is beyond my intelligence and pay grade, but bronchoalveolar lavage studies may help support this idea. For instance, in one cohort (3) 81% of HIV positive patients had a high density of PJP compared to 35% of the non-HIV patients.  Neutrophil count off BAL was higher in HIV-negative patients (65,475) compared to HIV-positive patients (24750). A retrospective study of 109 patients confirmed this finding using PJP PCR, with non-HIV patients having lower fungal loads based on the Ct value, shorter duration between symptom onset and treatment (7 days vs 30 days), and higher rates of hypoxia (95% vs 80%) compared to the HIV-infected patients. Finally, a retrospective cohort of 75 patients (6) found that serum BD glucan (107.1 vs 30.5, p <0.001) and Grocott stain positivity (73% vs 4.3%) were higher in the HIV-positive cohort compared to the HIV-negative cohort, both reflecting a higher fungal load.

If there is a higher degree of inflammation and higher rates of hypoxemia in the non-HIV patients, this would likely translate to worse outcomes. Unfortunately, this is what typically happens. Whether this is because people do not identify PJP in this population and start therapy later or a dysregulated immune response is unclear to me. Regardless, this is the pattern typically seen. For instance, one retrospective study (6) found that survival was statistically lower in the HIV-negative group:

With multivariate analysis finding that HIV infection and SOT were protective of mortality, though allogeneic HSCT and time to PCP treatment were associated with higher mortality:

That last part was confirmed in another study, finding ICU admission, intubation, and mortality being higher in the non-HIV group (9):

The use of steroids in non-AIDS patients is not quite clear cut, though the UpToDate does recommend its use. While it may seem this would be a no brainer, the data is scant and conflicting. For instance, multivariate analysis from a retrospective study (3) found that lymphopenia <800 and adjunctive steroid use were associated with higher mortality:

A small retrospective study of 31 patients found that steroid therapy did not improve mortality or need for mechanical ventilation in non-HIV patients, but there was a trend towards benefit in patients who had a high burden of pneumocystis (10):

A larger study (11) used propensity score matching to evaluate early corticosteroid (within 48 hours) therapy in non-HIV PJP patients. Matching 2:1, early corticosteroids cause a higher mean reduction in respiratory SOFA score at day 5 but not day 7, but it did not reduce SOFA scores by a full point:

Furthermore, when looking at more clinically oriented outcomes, steroids were not associated with difference in length of stay, need for mechanical ventilation, ICU admission, or 30 day all cause mortality:

Notably, there was a trend towards worse mortality in the early steroid group:

A larger retrospective study (12) used inverse probability weights to adjust for imbalances in a Japanese population with PJP. The use of adjunctive steroids was associated with a lower mortality in patients with severe PJP (PaO2 <60mmHg), but not in those with moderate PJP:

Further, a moderate dose, usually around 0.4-0.7mg/kg/d of prednisolone equivalents was the dose most associated with this benefit:

This benefit was also seen in severe PJP patients who required mechanical ventilation, though these tended to stay in the hospital for longer (22 days vs 14 days).

Two meta-analyses were also performed on multiple retrospective studies. The earlier one did not find any mortality benefit to adjunctive steroid usage (13), however a larger one (14) that included a total of 16 trials with 2518 patients overall, corticosteroid in non-HIV PJP was associated with higher ICU mortality: 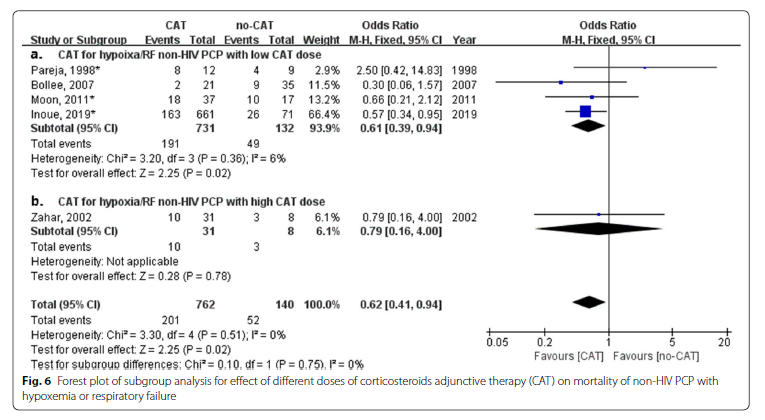 It is certainly difficult to draw any meaningful conclusions, given the retrospective nature of these studies and the widely different patient populations and lack of standardization here. At the same time, it seems physiologically reasonable to give corticosteroids to those who have severe hypoxemia, as these are the ones who tend to benefit the most from them. Based on the above, the standard prednisone taper used in PJP provides a fairly moderate amount of prednisone that is fairly tolerable.