If you are reading this, I am sure you are aware of C. diff. You have either thought about it in patients who are getting antibiotics and have diarrhea, groaned at the fact you have to don PPE when “ruling out” C. diff, or had a horrible experience (perhaps not personal) where things went south fairly quickly. The therapy for C. diff, at least for initial episode and first recurrence, is pretty clear cut. In this post, I will focus on the data behind the therapies for C. diff colitis and why we do what we do. I will not be covering severe or fulminant colitis, as this is an area with scanty data (as you would expect when patients are severely ill). That is a monster for another post.

In the Beginning, There was Metronidazole.

Your typical ID joke that has been told over the years (even prior to the release of the latest 2018 IDSA/SHEA guidelines, 1) with regards to C. diff treatment has been “you only give metronidazole to your mother-in-law” (which, to be fair, I do not know where the mother-in-law trope came from). For quite a while, MTZ was the first line therapy for non-complicated C. diff colitis cases, and it is used when oral vancomycin is not available. Part of the reason being the fact that oral vancomycin tends to stay in the GI tract, though the concentrations of both IV and oral metronidazole tend to be fairly high. In one analysis of 9 patients (2), the fecal concentrations of MTZ were well above the MIC, though this was higher for the watery and semi-formed stools. Notably, as the stool was more formed, the concentrations were a lot lower, reflecting decreased concentration of MTZ and its metabolite as inflammation decreases:

Despite this, there has been a trend towards more treatment failure when patients are treated with metronidazole. A prospective observational study of 207 patients who received at least 7 days of metronidazole found that only 50% of patients had a complete clinical cure during initial treatment (3).28% responded initially but recurred within 90 days after therapy completion. 18 additional fecal samples were studied and found they were all susceptible (MIC 0.125-1.0 ug/mL), of which 4 had recurrent disease. A retrospective analysis of the Quebec providence (4) evaluated a total of 2042 patients from 1991 to 2004 and found that in patients treated with metronidazole, recurrences increased from 20.8% from 1991-2002 to 47.2% in 2003-2004:

The same was seen for PO vancomycin, although lower than that of metronidazole (23.2% from 1991-2002, and 38.5% from 2003-2004, p=0.12). Notably, the proportion of patients switched from metronidazole to vancomycin also increased between the time periods, from 9% of 688 patients between 1991-2002, to 25.7%  of 435 in 2003-2004. This could be attributed to a hypervirulent strain of C. diff, however this also reflects the overall trend seen in clinical practice (around 2003, the hypervirulent strain of NAP1/BI/027 of C.diff emerged in North America). The reasons for this is unclear, however part of this seems to be the fact that oral vancomycin tends to have a higher concentration than MTZ within the stool. A small study in carriers (with no diarrhea) found that patients receiving oral vancomycin achieved a significantly higher fecal concentration than those who got metronidazole (5)

As mentioned previously, metronidazole fecal concentrations decrease as stool forms, and this may, in turn, lead to higher relapses. Vancomycin, as a result, has emerged as first line therapy according to the most recent IDSA guidelines (1). This has been established in 2 meta-analysis as well as 2 large retrospective VA studies. One meta-analysis of 6 studies (6), including RCTs and prospective cohort studies, found that clinical cure rates favored oral vancomycin (RR 0.91, 95% CI 0.84-0.98), which was mostly driven by severe CDI (RR 0.81, 95% CI 0.69-0.95). There was no statistical difference in mild CDI (95% CI 0.94-1.04). Notably, overall sustained cure (both cure + recurrence) favored vancomycin (RR 0.81, 95% CI 0.67-0.99), with no statistical difference between either drug for recurrence or all-cause death. Another meta-analysis (7) evaluating only RCTs found there was no statistical difference for clinical cure between vancomycin and metronidazole (RR 1.08, 95% CI 0.99-1.17), though there was a trend towards favoring vancomycin:

There was no difference for clinical relapse. This can be a little surprising, as I just said vancomycin is the better choice, however these meta-analysis pool pre-2003 studies and post-2003 studies. This is important, as I mentioned this is when the “spike” in MTZ failure occurred. Indeed, in looking at 2 of these RCTs, you can see the effect take place. In one prospective, randomized, double-blind, placebo-controlled trial (8), patients were stratified based on their disease severity. Primary endpoint was a clinical cure. 150 patients completed the trial, with the overall cure favoring vancomycin, which was driven mostly by the severe disease group:

There was no statistical difference in relapse between groups, though it overall trended in favor of vancomycin:

Another study of 2 randomized trials (9)  also evaluated both PO vancomycin and MTZ, but also Tolevamer, which is a polymer that binds C. diff toxins. This randomized, double-dummy, double-blind, parallel study evaluated all three, with patients randomized in a 2:1:1 ratio to tolevamer, vancomycin, or metronidazole. Primary endpoint was clinical success. 1118 patients were randomized across both trials, and metronidazole, when the 2 studies were pooled together, had lower rates of clinical success at day 10 when compared to PO vancomycin. This also held true when stratified by severity, though this did not reach statistical significance:

Tovelamer, as you can see, did not do so well here. Nevertheless, that is not the important part, but rather the favorability of oral vancomycin over MTZ. A large retrospective, propensity score matched study from the VA (10) evaluated over 47,000 patients with CDI and found that those who received vancomycin had lower risk of mortality when compared to patients treated with MTZ (8.6% vs 10.6%, p=0.01), which was driven mostly by a 4.5% reduction (15.3% vs 19.8%, p=0.01) in absolute mortality in those with severe CDI. There was no difference in the mild to moderate CDI group. Another VA retrospective, propensity score matched study looked at the mild CDI population (11). Multivariate analysis was used to evaluate the predictor of success of MTZ, of which only age was a factor. They used a younger (<65yo) cohort of MTZ to compare to that of vancomycin and found no statistical difference in all-cause mortality or recurrence:

For severe disease, it seems the matter is settled, with oral vancomycin coming out on top. Numerically, there is a trend towards vancomycin also being superior in those with mild disease, however the data does not seem to bear that out just yet. The 2 retrospective studies have issues, though they are quite large and well designed. Either way, if cost is not an issue, oral vancomycin is the way to go.

In terms of dosing, it tends to be 125mg every 6 hours, as all of it gets into the large bowel. This was established in an old study, comparing 125mg and 500mg doses (12) in 45 patients. At one week, 91% of patients in both groups had responded, with either dose not reaching a statistical significant difference in terms of clinical response:

Further, higher doses were not associated with faster resolution of symptoms:

It should be noted that in fulminant CDI, guidelines suggest the use of 500mg q6h (1), though this is based on expert opinion rather than robust data.

This is now considered first-line therapy alongside oral vancomycin (the only thing limiting its use is its cost). This is a first-in-class macrocyclic antibiotic, related to the macrolide (the latter has 15-membered ring molecule, while the former has 18-members in its ring). The mechanism of action seems to be the inhibition of nucleic acid synthesis, though how this occurs is unclear (13). Fidaxomicin levels in serum was low, while fecal concentration was about 1225 ug/g, with intracolonic levels being about 5000 times above MIC90.

One of the advantages of fidaxomicin over vancomycin is its narrow spectrum of activity, having poor activity against anaerobic gram-negative bacteria, which means it has less effect on fecal microbiota:

This was confirmed in a study of 23 patients with CDI who were given either vancomycin or fidaxomicin (14). The percentage of enterococci and lactobacilli, as detected by oligonucleotide probes, did not differ in the fidaxomicin group in comparison to the vancomycin group, where it decreased significantly during therapy and increased shortly after cessation of therapy: 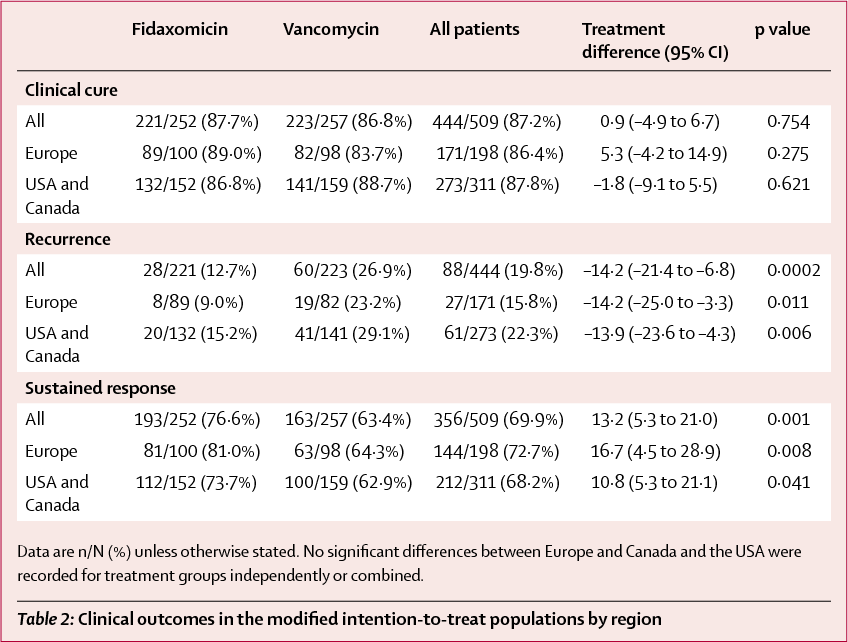 As seen above, fidaxomicin had lower rates of recurrence, which were statistically significant. While there was no statistical difference in clinical outcomes in subgroups, those who had concomitant antibiotics did better when given fidaxomicin (90% vs 73%, p=0.031).

Another prospective, multicenter, double-blind randomized trial randomized 629 patients in a 1:1 fashion (16). Primary endpoint was clinical cure at the end of therapy. In the mITT population, 88% of patients in the fidaxomicin and 86% of the vancomycin group met criteria for clinical cure:

Fidaxomicin was associated with a lower rate of recurrence than vancomycin in both mITT and the per protocol population, as well as higher rates of global cure (mITT 15.4% vs 25.3%, reduction of 9.9%, 95% CI -16.6 to -2.9; PP 13.3% vs 24%, reduction of 10.7, 95% CI -17.9 to -3.3). Rates of cure did not differ across subgroups in this trial (including concomitant antibiotics). Recurrence rate favored fidaxomicin across several subgroups, especially in the non-NAP1/BI/027 strains, 10.3% vs 28.1% (p <0.001). A meta-analysis of these 2 trials (17) found non-inferiority for fidaxomicin for clinical cure, but superiority demonstrated for fidaxomicin over vancomycin for recurrence and global cure (clinical cure + recurrence) at 40 days:

Moreover, the cumulative risk of persistent diarrhea, recurrence, or death was similar up to day 12, after which, it favors fidaxomicin:

Another analysis of these 2 RCTs evaluated outcomes in those who were on concurrent systemic antibiotics (19). 275 of these patients received antibiotics during their CDI therapy while 192 received them after CDI therapy. Not surprisingly, those who got concurrent antibiotics were less likely to achieve clinical cure and global cure, however fidaxomicin was superior to vancomycin when patients were getting one or more additional antibiotics (90% vs 79%, 10.6% difference, 95% CI 0.23-20.3). Global cure was achieved in 73% of fidaxomicin treated patients compared to 59% of vancomycin treated patients (13.3% difference, 95% CI 2.1-24.1). Fidaxomicin also had lower incidences of recurrences even when taking antibiotics at any other point during the study, having a 12.3% advantage over vancomycin (16.9% vs 29.2%, 95% CI -23.9 to -0.12).

Both fidaxomicin and vancomycin seem to be equally efficacious for first recurrence. A study looked at the subgroup of 178 patients in the above trials who had recurrence (20), with clinical cure being similar in both groups (937% for fidaxomicin vs 91.6% for oral vancomycin) in the per protocol analysis. Despite this, those in the fidaxomicin group were less likely to recur following the first episode:

And time time for recurrence was significantly longer in the fidaxomicin group:

These are things I came across that I think are interesting. This is my blog, and I get to write whatever I want.

Of course, this is a single-center study, and I do not see teicoplanin being a first line therapy anytime soon (too costly, probably). Plus, data is quite scanty. A case series of 9 patients with refractory C.diff colitis found that Teicoplanin achieved cure in all cases (23), with another case series of 11 patients finding similar results (24).

What about prophylactic oral vancomycin? Again, data is scanty, and guidelines literally have no recommendation here. One of the studies they cite (25) found that those who received prophylaxis having a lower incidence of C. diff infection (4.2% vs 26.6%, OR 0.12, 95% CI 0.04-0.4). Though this study was a retrospective single center study and there were several doses used.